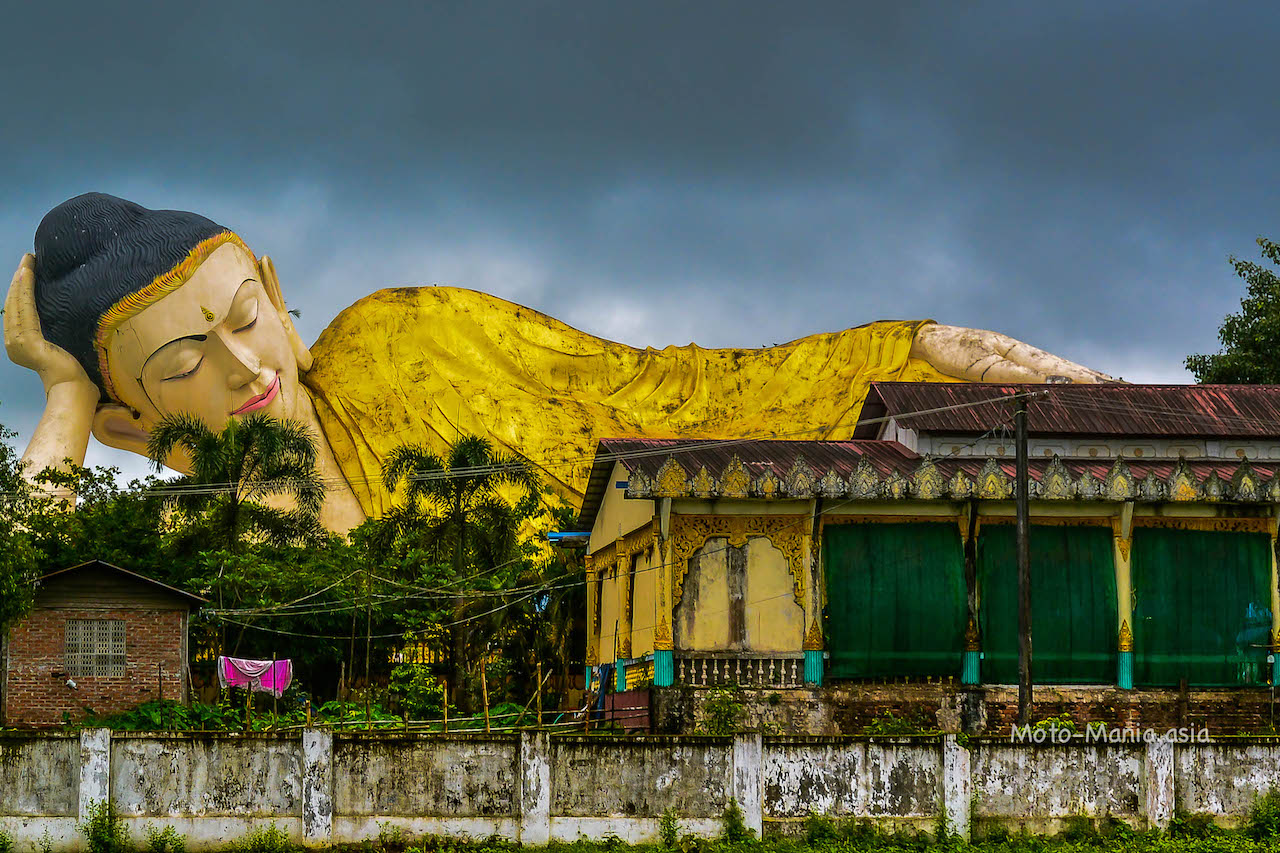 Exploring the sites in Bago.

Kyaikpun Pagoda (Burmese: ကျိုက်ပွန်ဘုရား, IPA: [tɕaiʔpʊ̀ɴ pʰəjá])(ကျာ်ပန် in Mon, Kyaik (Buddha) & Pon (Four), is a pagoda in the Bago Division of Burma, in the city of Bago. Most notably, Kyaik Pun Pagoda is the home to the Four Seated Buddha shrine, a 90 ft (27 m) statue depicting the four Buddhas namely Kakusandha, Konagamana, Kassapa, and Gautama seated in four positions, sitting back to back to four directions. The Four Seated Buddha was built by King Migadippa of Bago in the 7th Century AD (tradition) and renovated by King Dhammazedi in the 15th century AD. 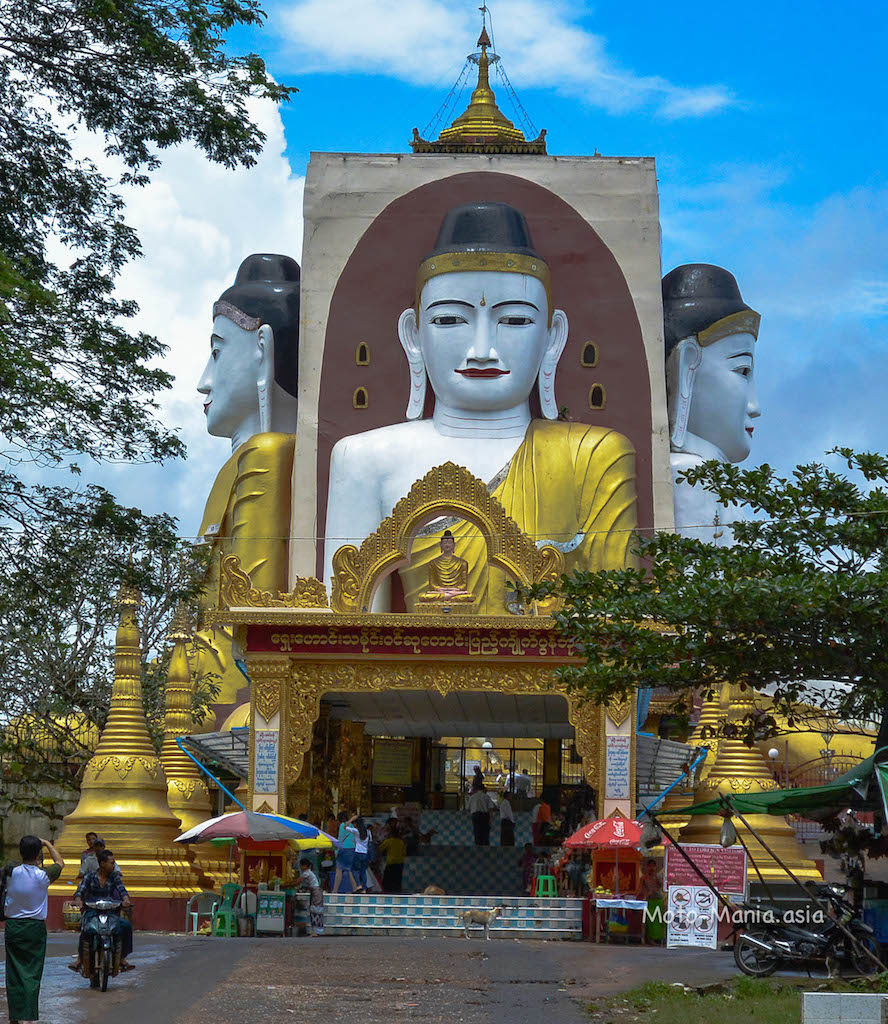 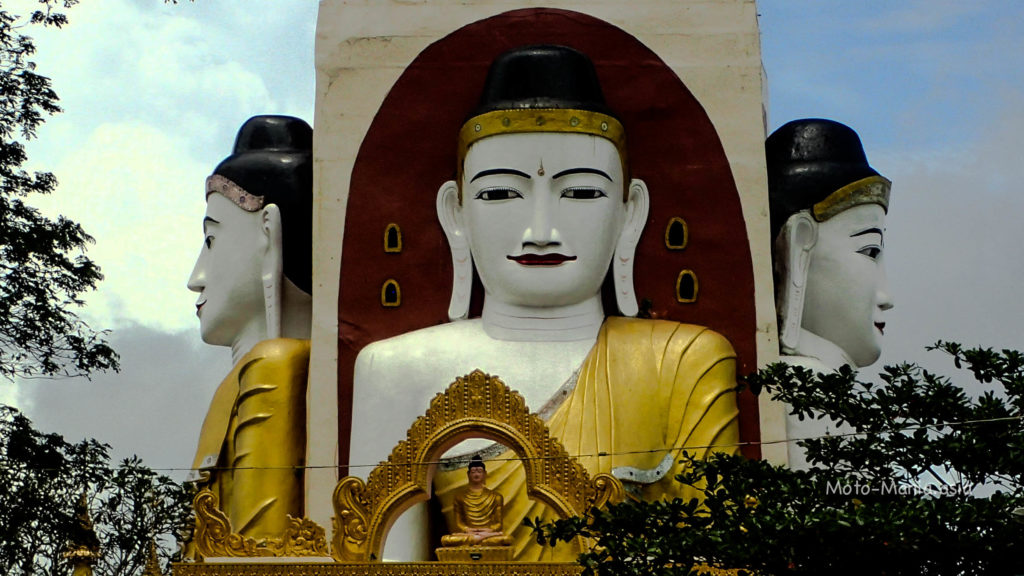 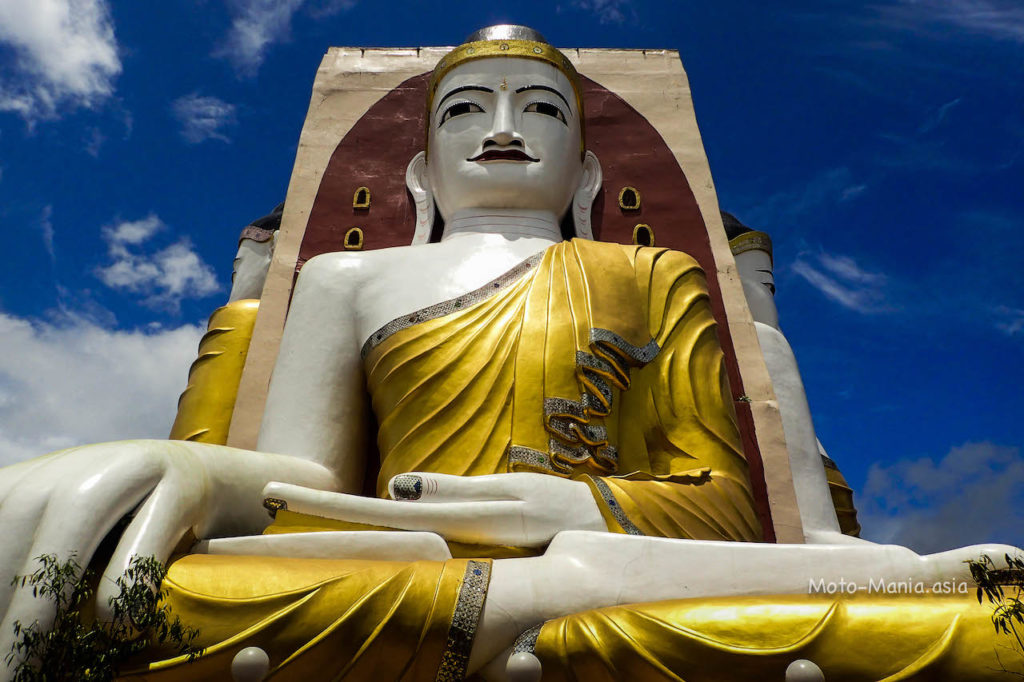 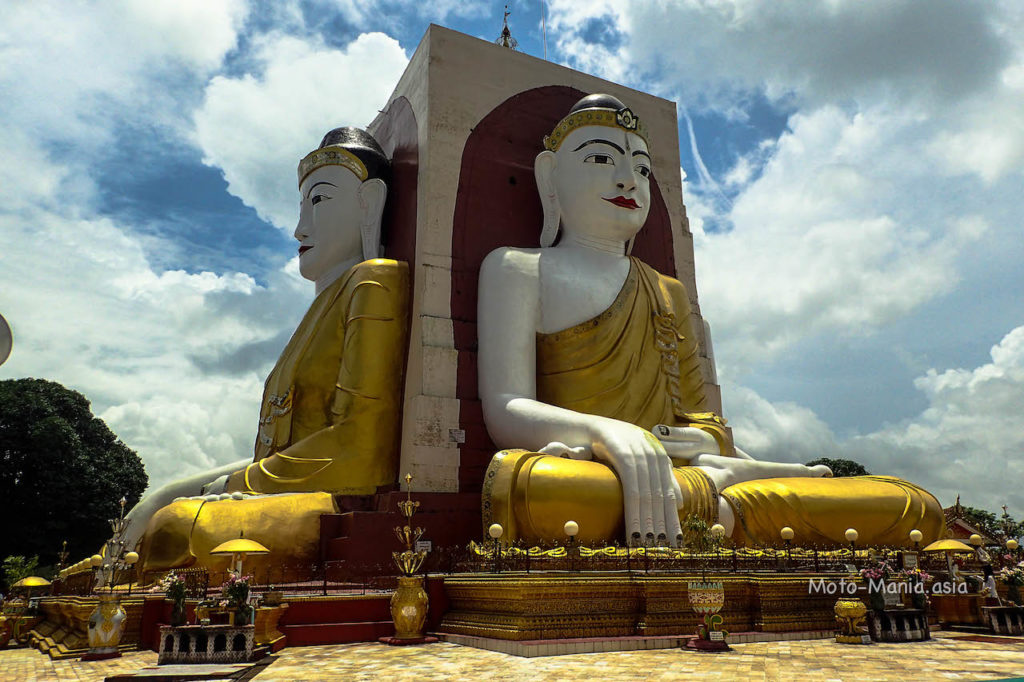 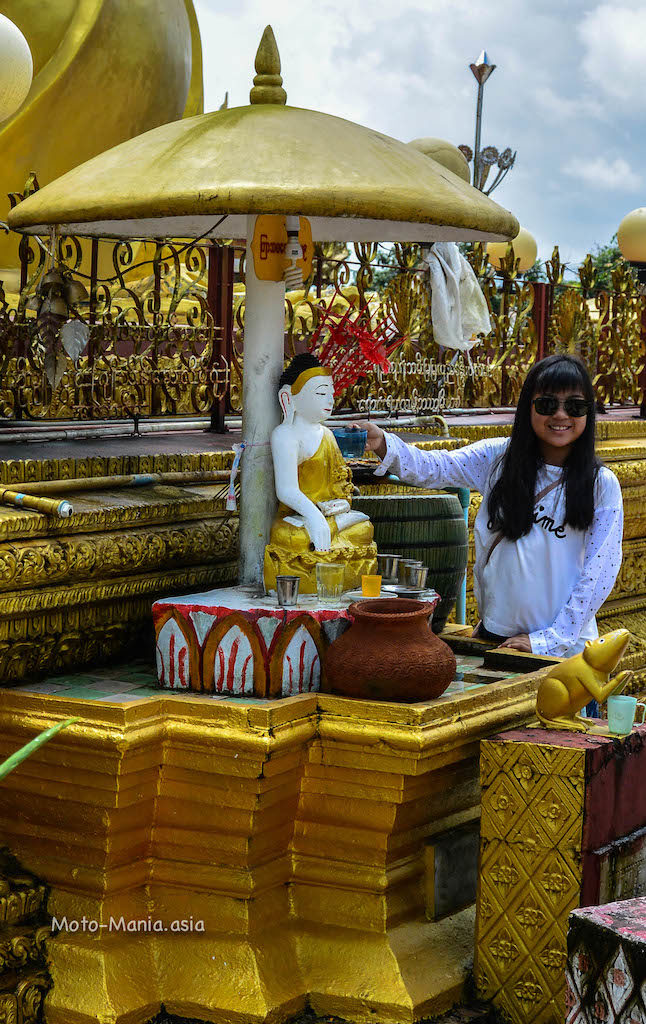 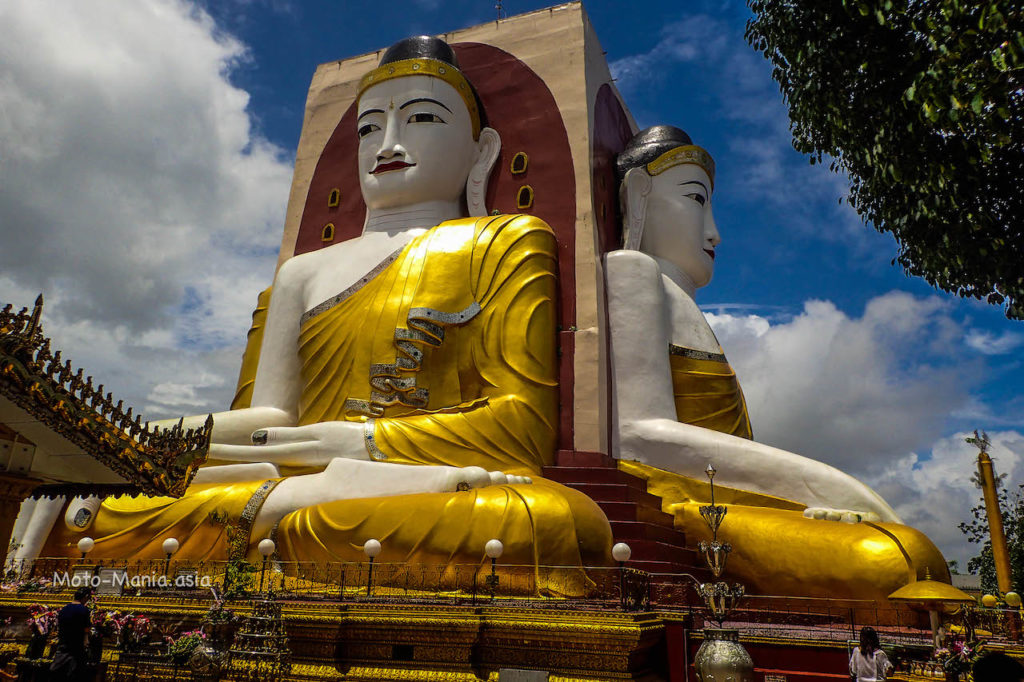 Kanbawzathadi Palace (Burmese: ကမ္ဘောဇသာဒီ နန်းတော်, pronounced [kàɴbɔ́za̰θədì ʃwè náɴdɔ̀]) is a palace in Bago, Myanmar. The original palace, built for King Bayinnaung in 1556, consisted of 76 apartments and halls. It was burned down in 1599. It was reconstructed in 1990 and finished in 1992.[1]

Kanbawzathadi Golden Palace in Bago is a reconstruction of the original Royal palace from the second half of the 16th century.

The very ornate golden palace gives a good impression of the splendor and wealth of the second Burmese empire. It was rebuilt following the original design, based on knowledge gained from excavations and the original drawings of the building. The huge palace consisted of 76 apartments and halls.

The reconstructed palace does not contain much of the original furniture and personal items used by the Royals, as most of it was lost when the palace was looted and destroyed in 1599. There are several reproductions on display, like a replica of the King’s golden coach, decorated with two peacocks and a Pyatthat style roof. 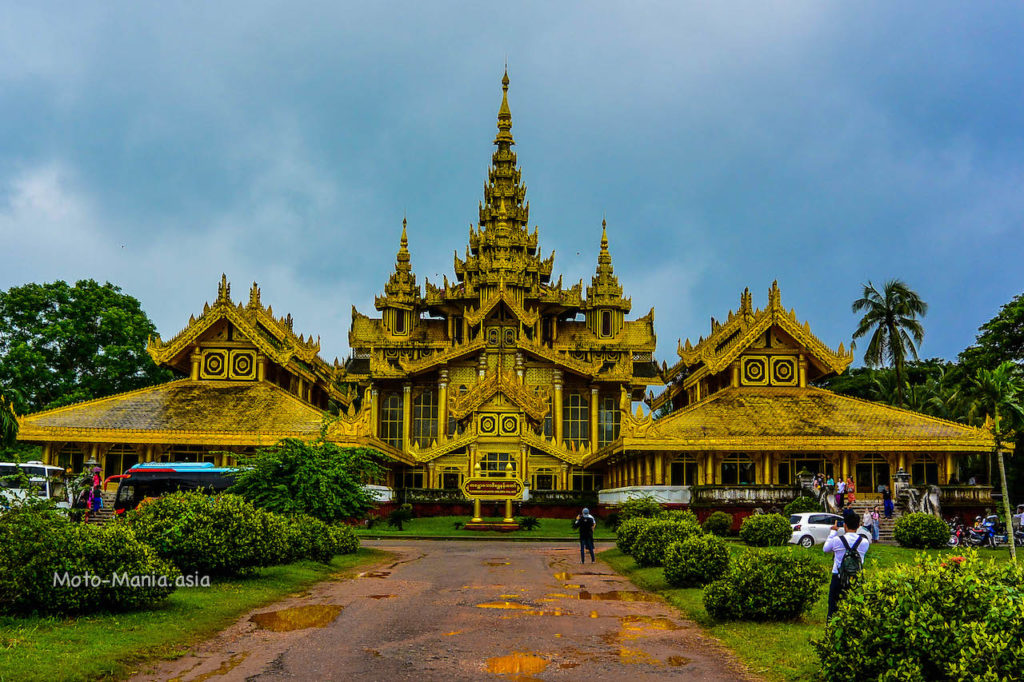 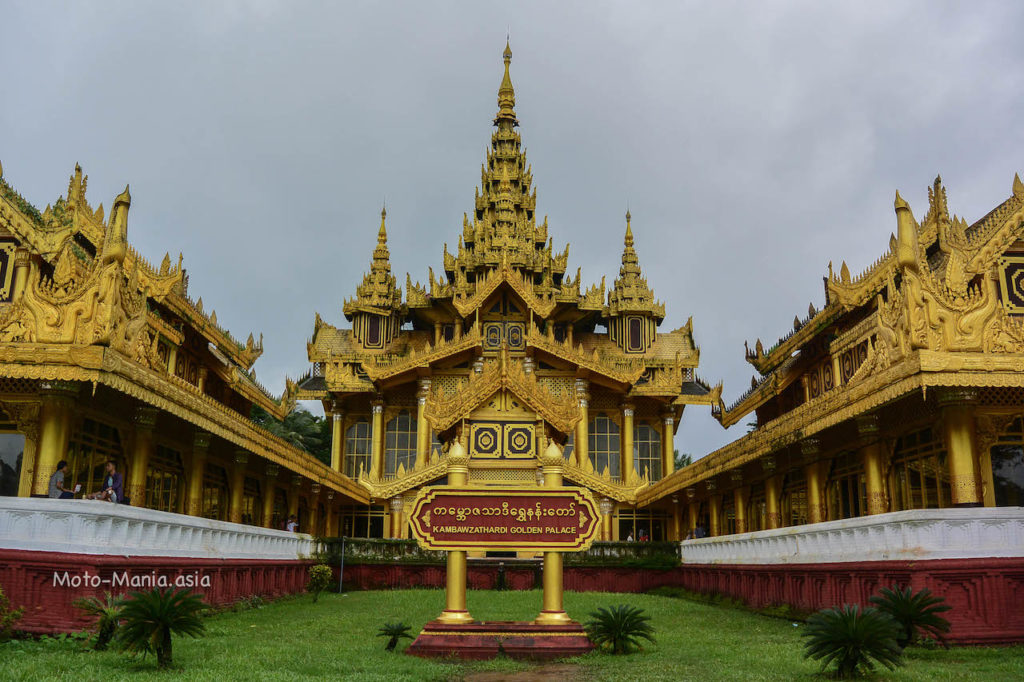 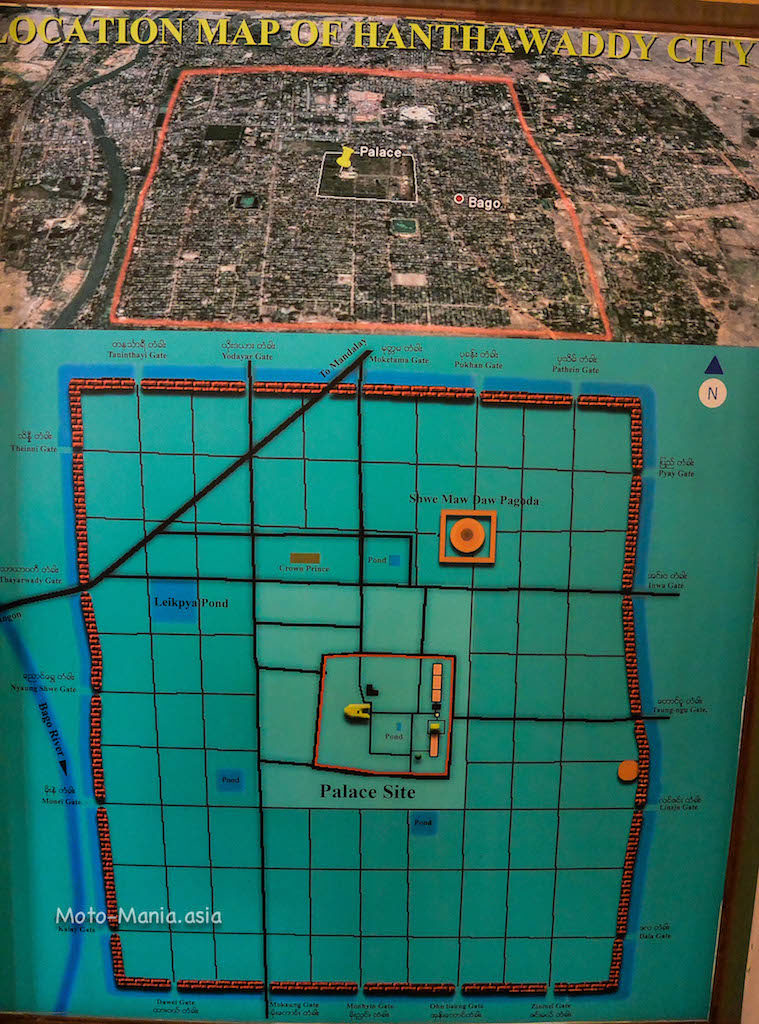 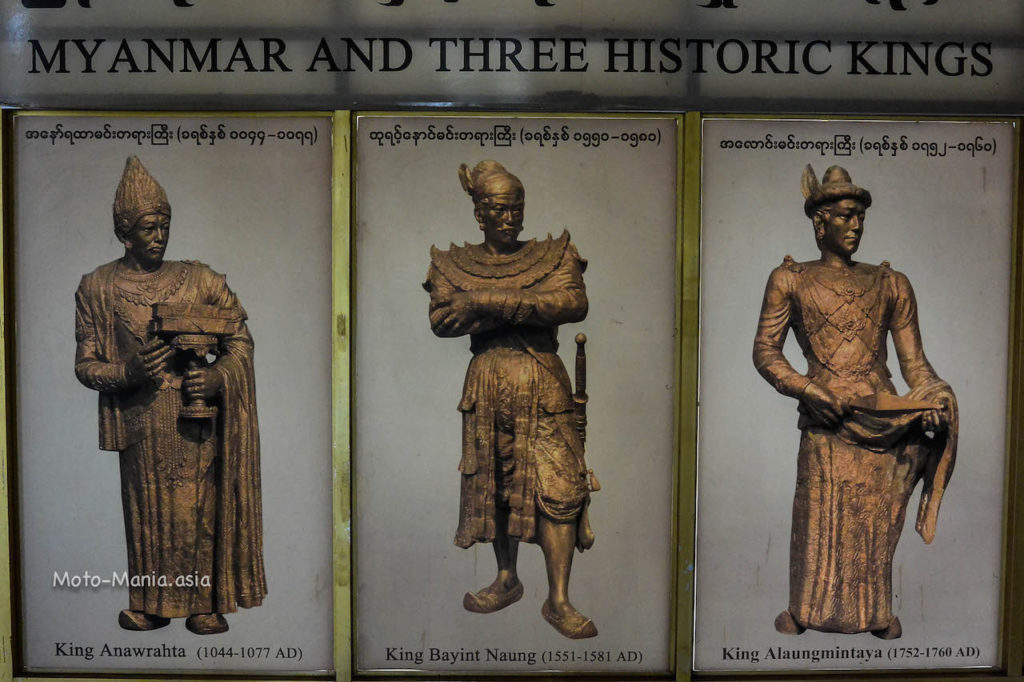 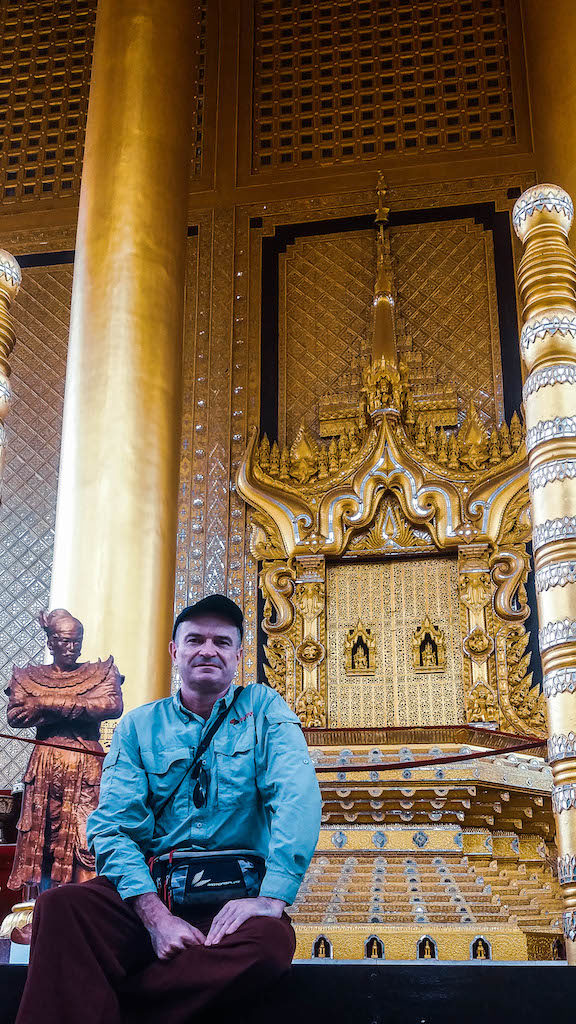 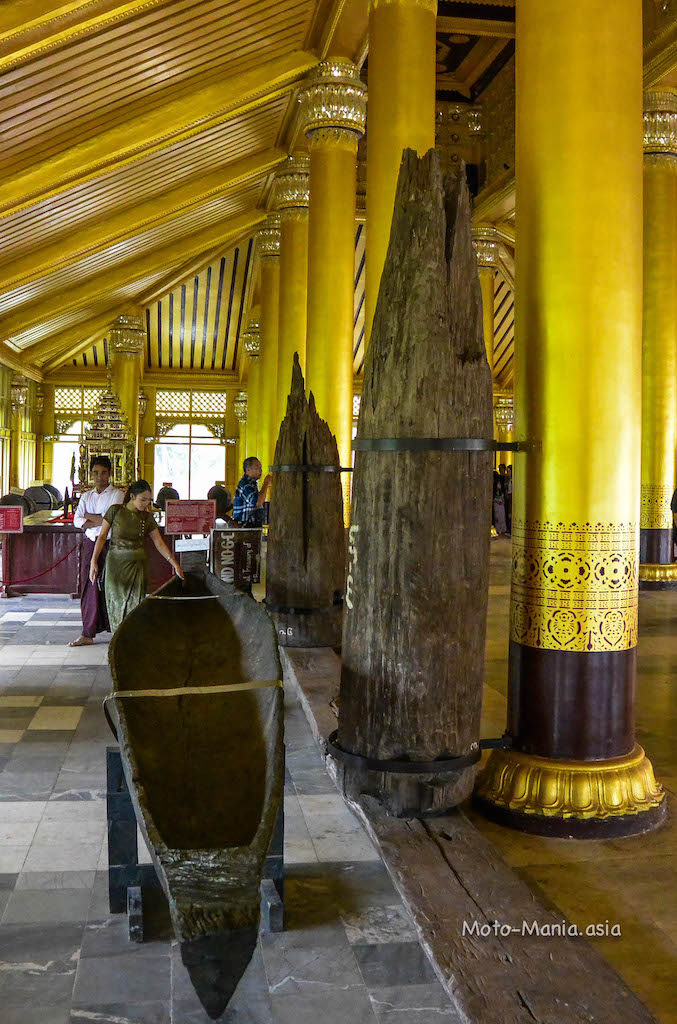 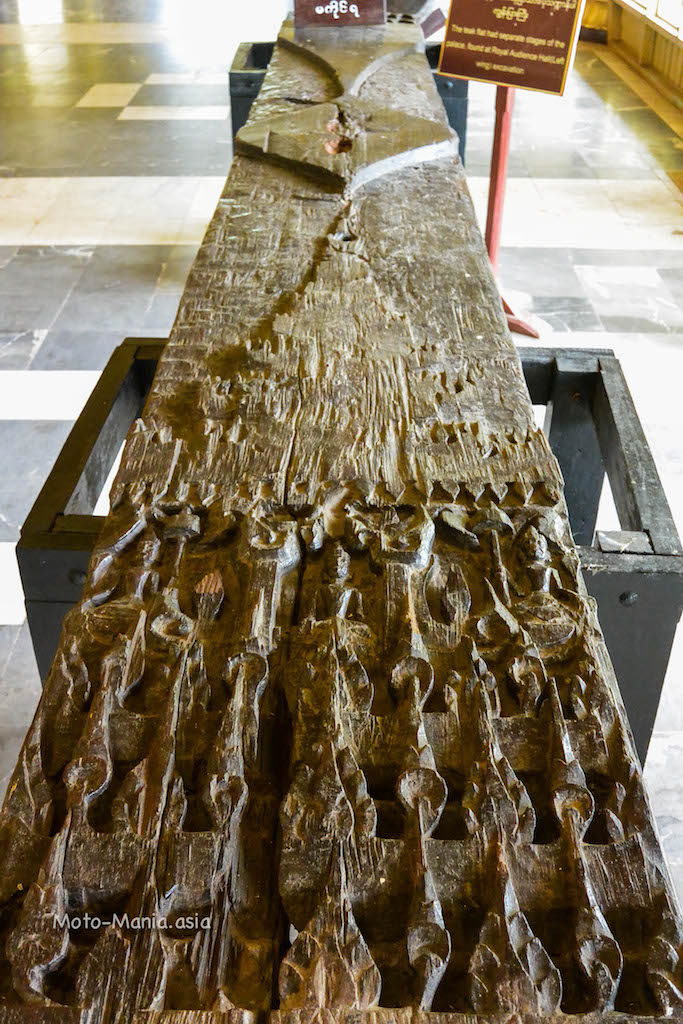 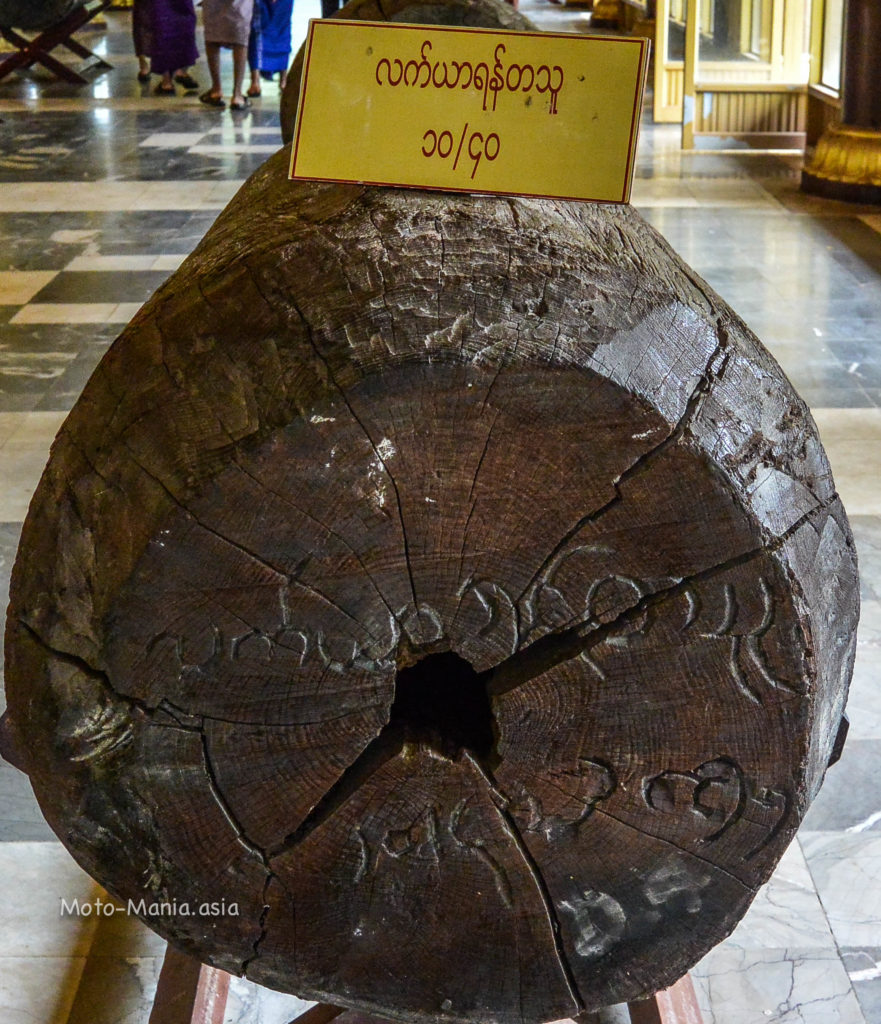 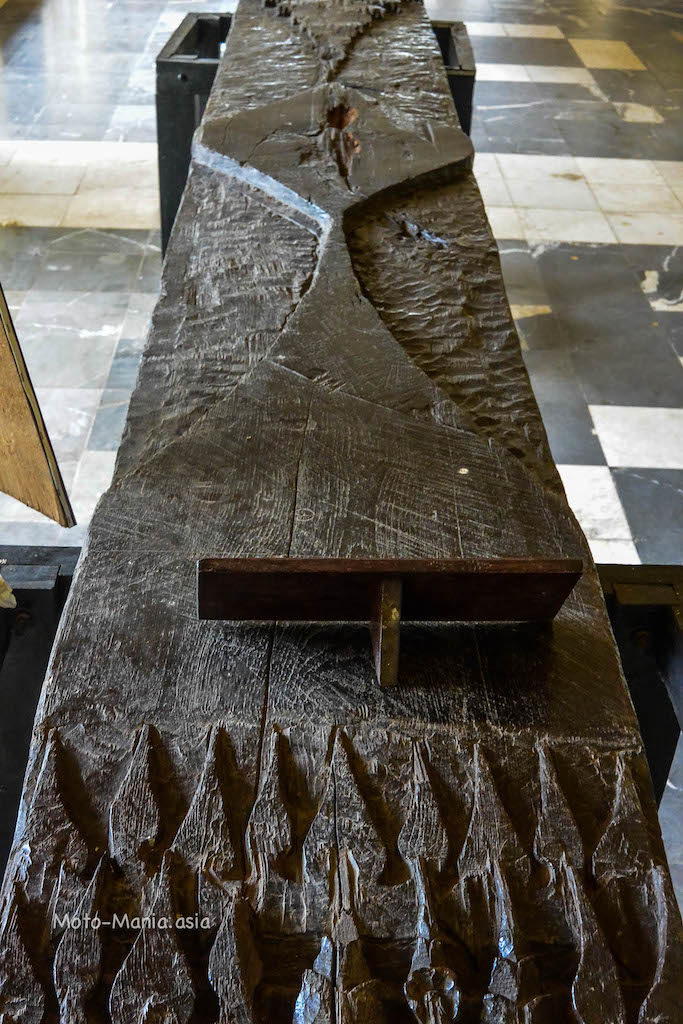 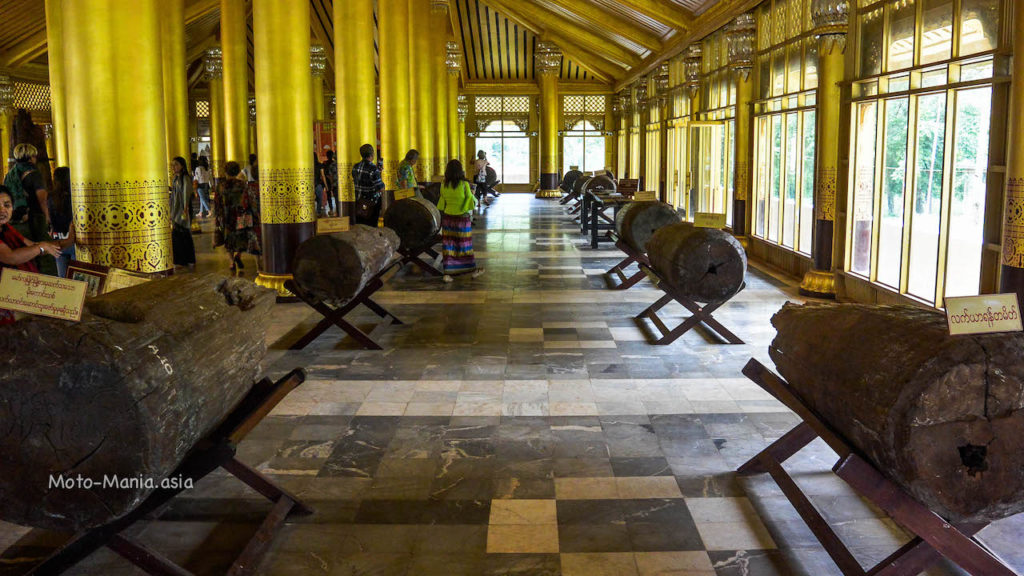 The Shwethalyaung Buddha (Burmese: ရွှေသာလျှောင်းဘုရား [ʃwèθàljáʊɴ pʰəjá]; officially ရွှေသာလျောင်းရုပ်ပွားတော်ကြီး) is a reclining Buddha in the west side of Bago (Pegu), Myanmar. The Buddha, which has a length of 55 metres (180 ft) and a height of 16 metres (52 ft), is believed to have been built in 994, during the reign of Mon King Migadepa. It was lost in 1757 when Pegu was pillaged. During British colonial rule, in 1880, the Shwethalyaung Buddha was rediscovered under a cover of jungle growth. Restoration began in 1881, and Buddha’s mosaic pillows (on its left side) were added in 1930. 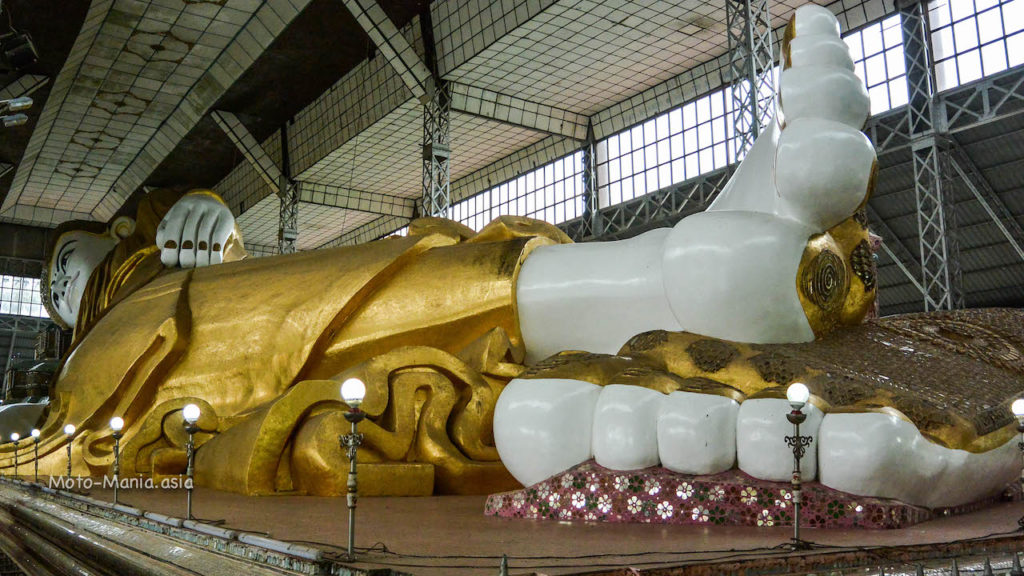 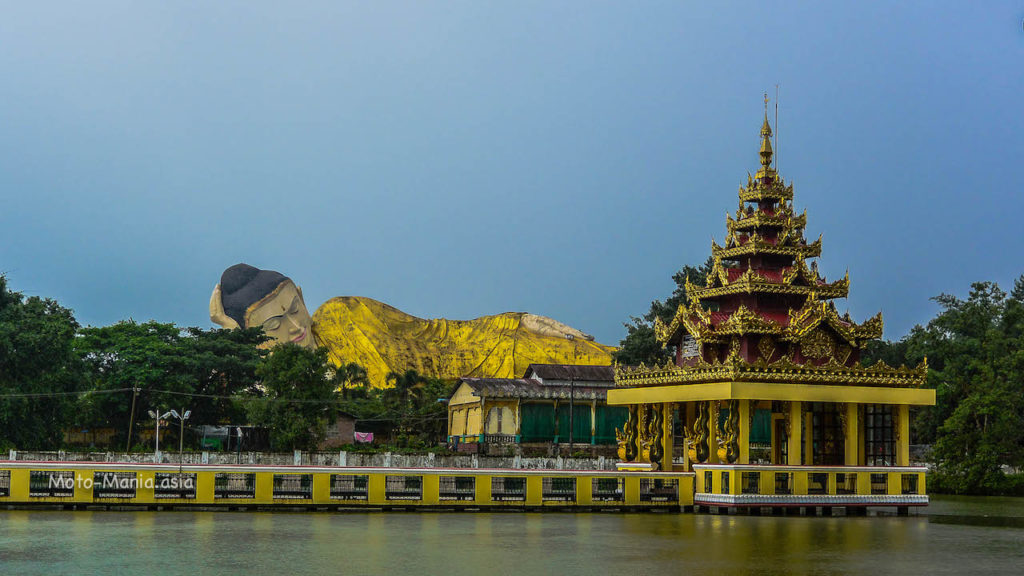 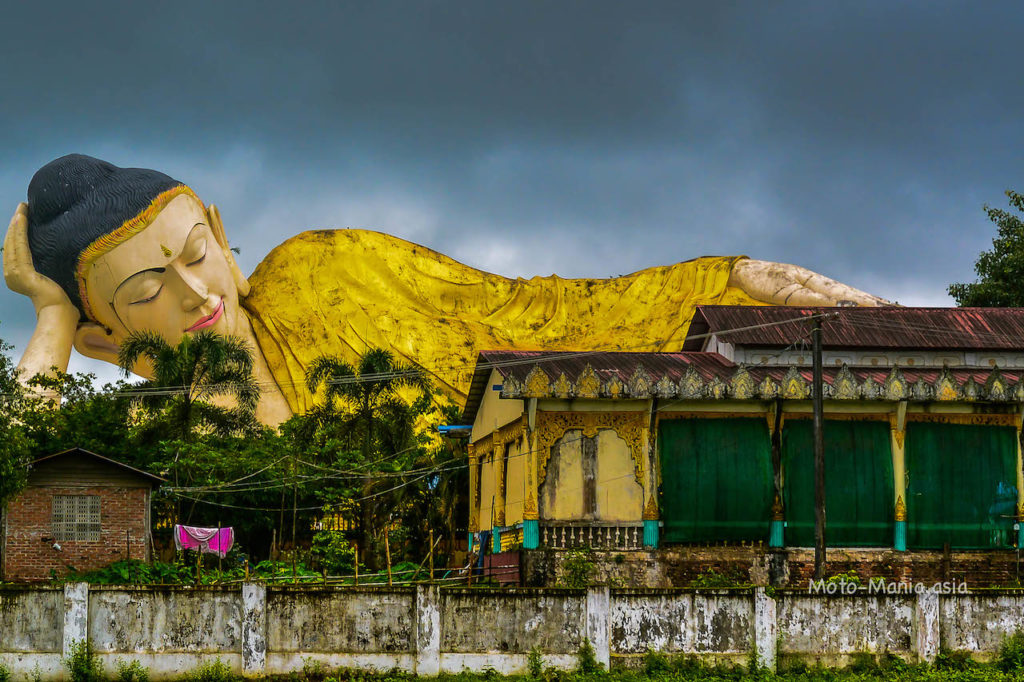 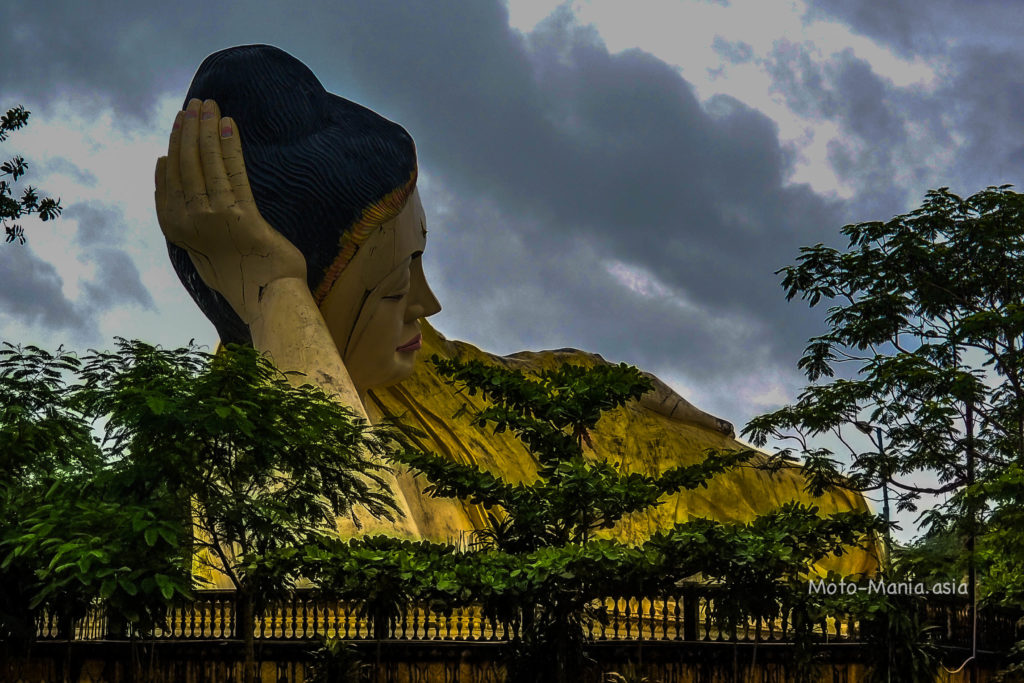 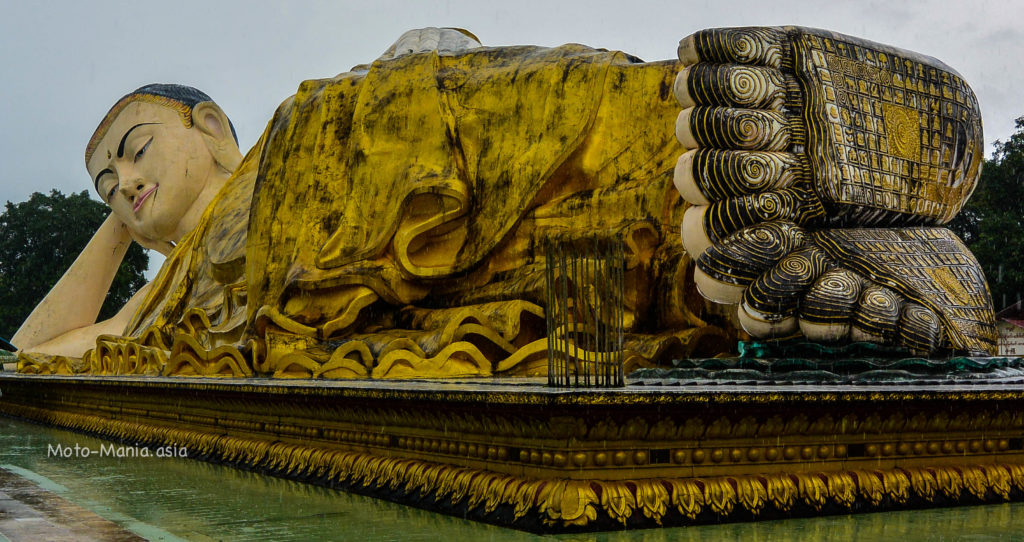 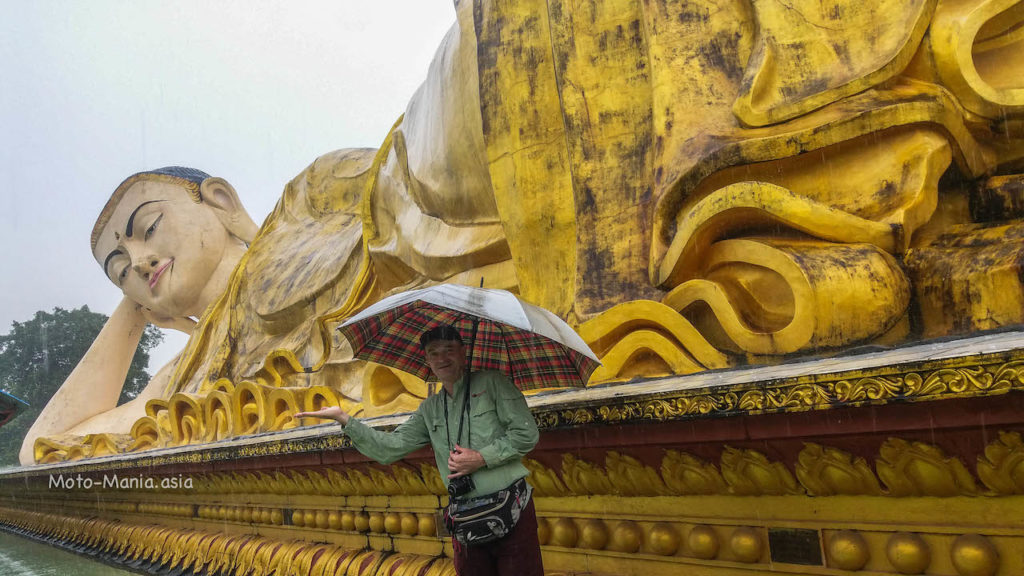 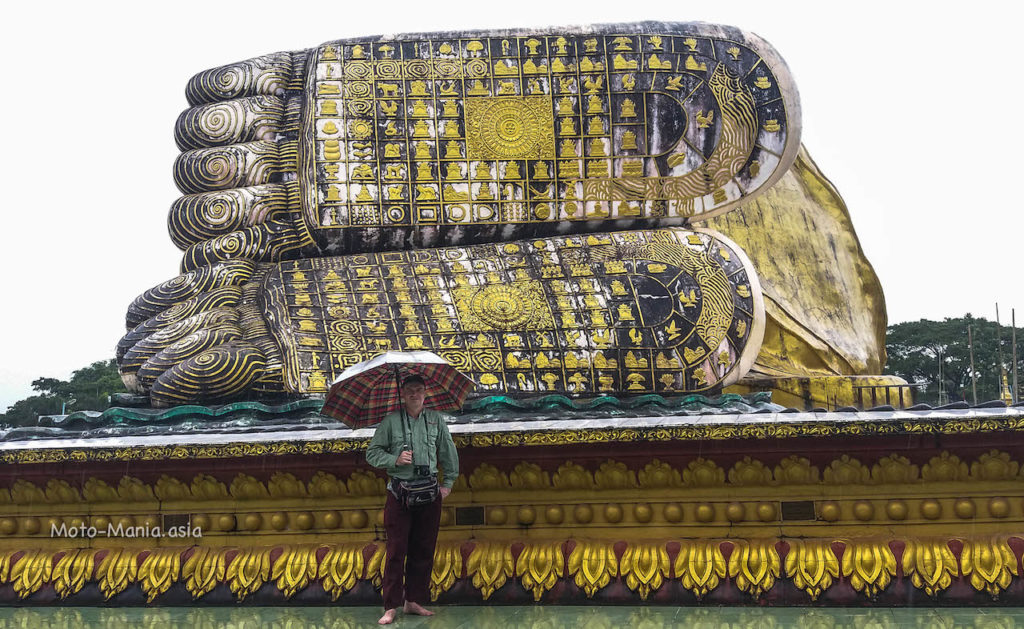 The Shwemawdaw Pagoda (Burmese: ရွှေမောဓော ဘုရား [ʃwè mɔ̀dɔ́ pʰəjá]; Mon: ကျာ်မုဟ်တ [tɕaɪʔmṵtú]) is a stupa located in Bago, Myanmar. It is often referred to as the Golden God Temple. At 114 metres (374 ft) in height, the Shwemadaw holds the record for the tallest pagoda in the country although the Shwedagon Pagoda in Yangon is usually credited as the tallest pagoda in Myanmar (at 98 metres (322 ft)). Shwemadaw, along with the Shwedagon and Kyaiktiyo, are famous Mon pagodas. The pagoda’s annual festival is a 10-day affair that takes place during the Burmese month of Tagu.[1] 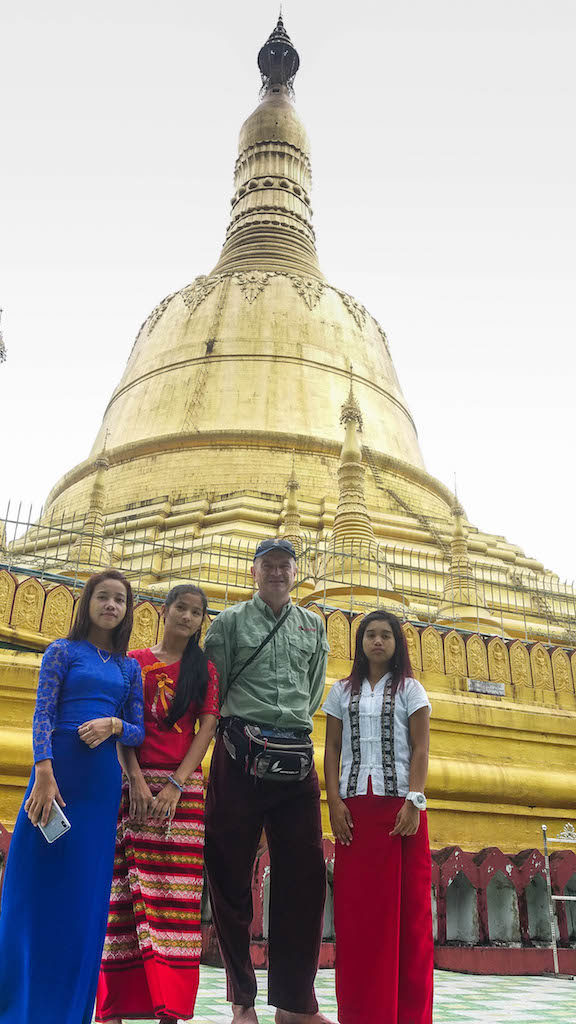 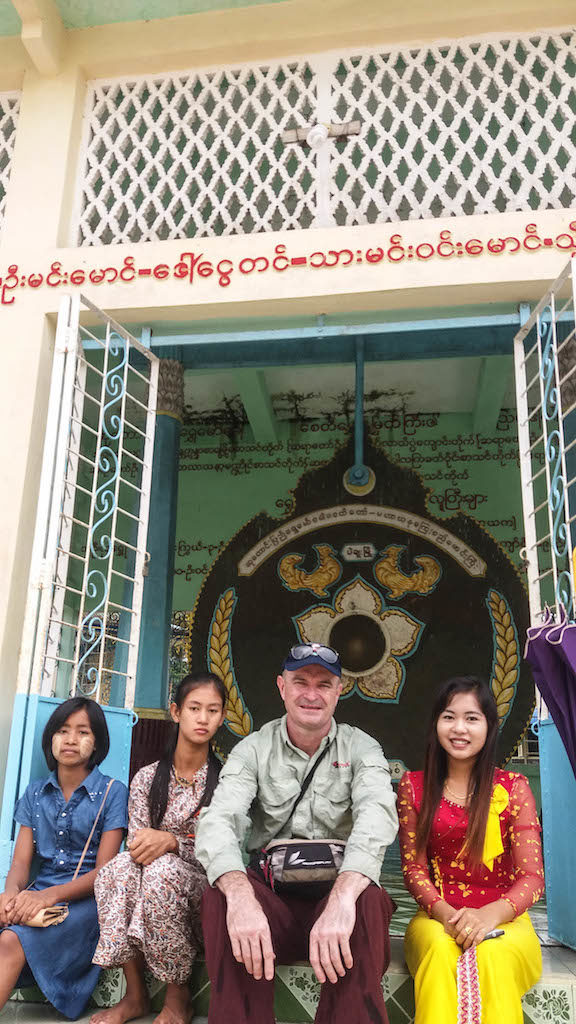 Remaining part of the Pagoda damaged during the 1917 earth quake. 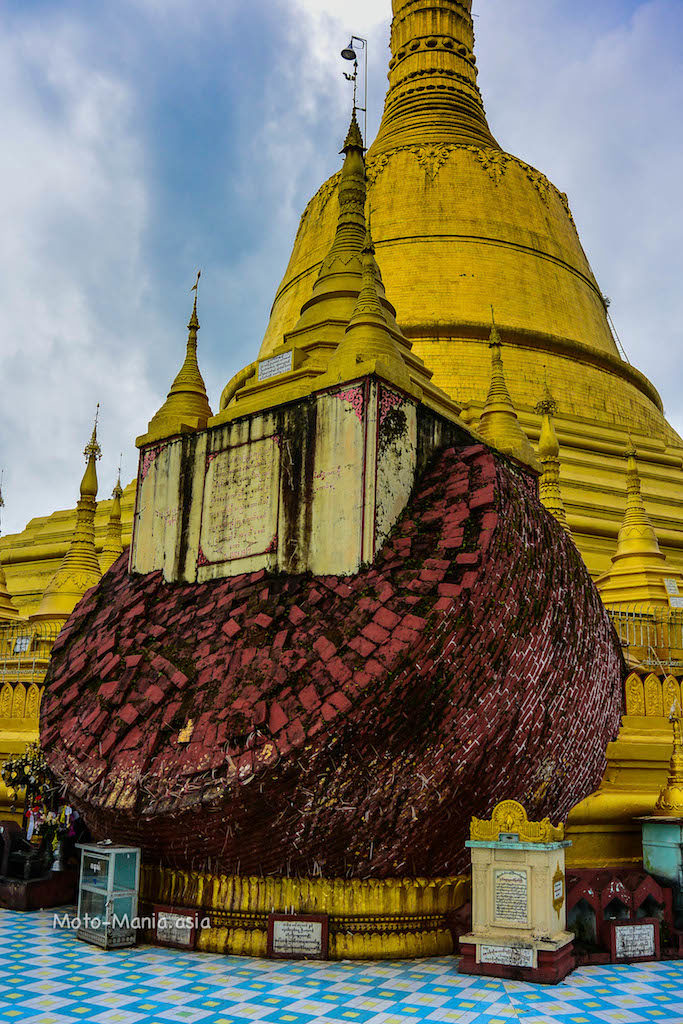 The Hintha Gon Pagoda is a shrine in Bago, Myanmar.[1] It is a popular tourist destination as it was named after the mythological Hintha bird,[2] a symbol of the Mon people.[3][4]

The monastery is situated on top of a hill that, according to Myanmar legend, was the only point rising from the sea where the Hintha bird could land.[5] Paintings and carvings of the Hamsa are visible throughout the temple.[6]

The Shwemawdaw Pagoda (tallest pagoda in Myanmar) can be viewed to the east, making it a popular view point.

There is a big song and dance going on upon walking up the steps. 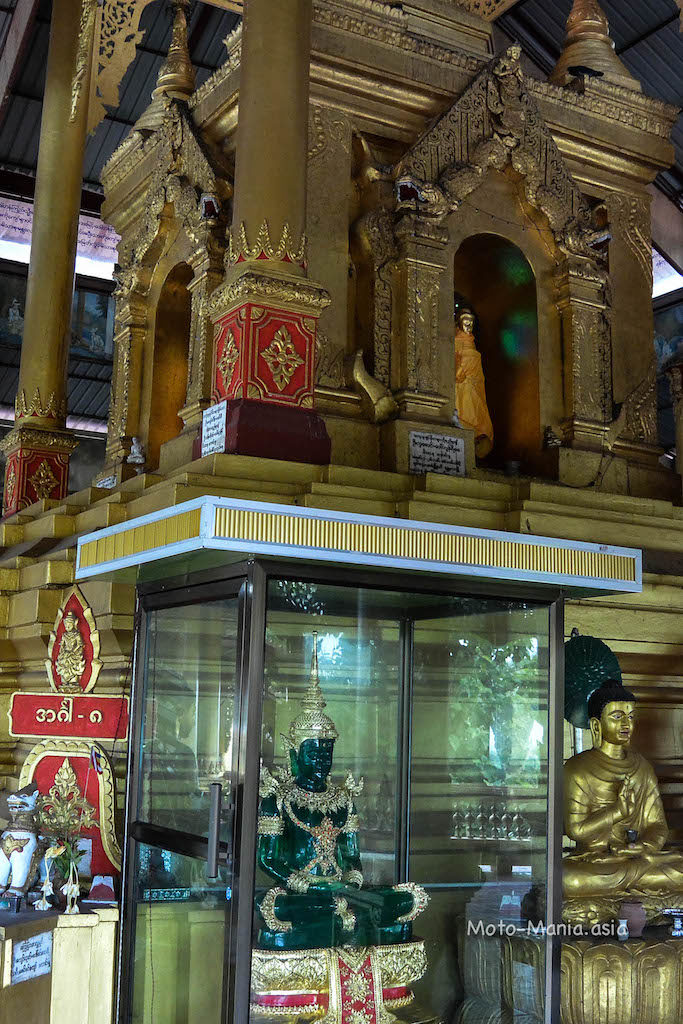 View of the Shwemawdaw Pagoda to the right. 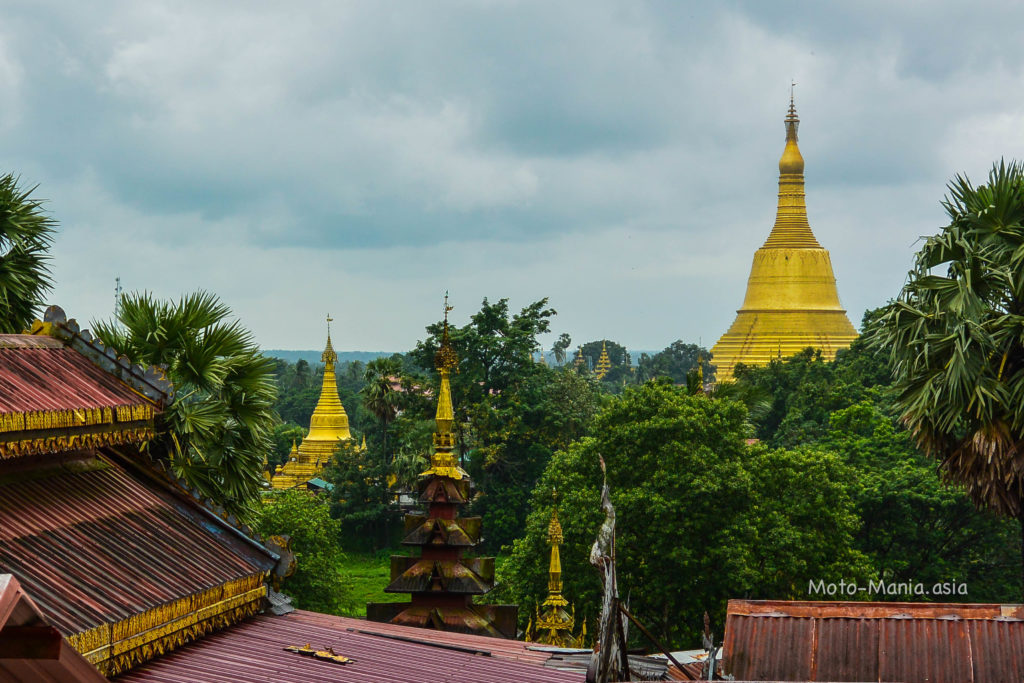 The lady doing all the drinking and dancing made a promise to the Spirit.

If her new business is successful.. She will come back and have a party for the spirit

Well the business is successful and she is partying her head off.

The Spirit can only eat BBQ chicken and drink this Whiskey.

A local spiritual belief. The temple allows the party.