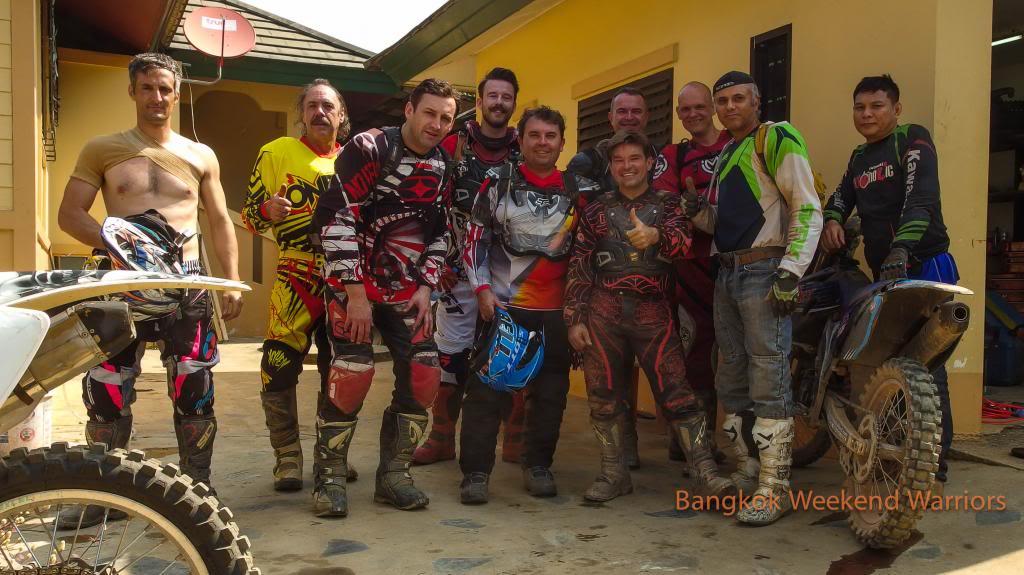 Just back from Alan’s memorial ride at Baan Ricky.

What a great weekend and a great turn out.
I know there are many more people that would have liked to attend but couldn’t. 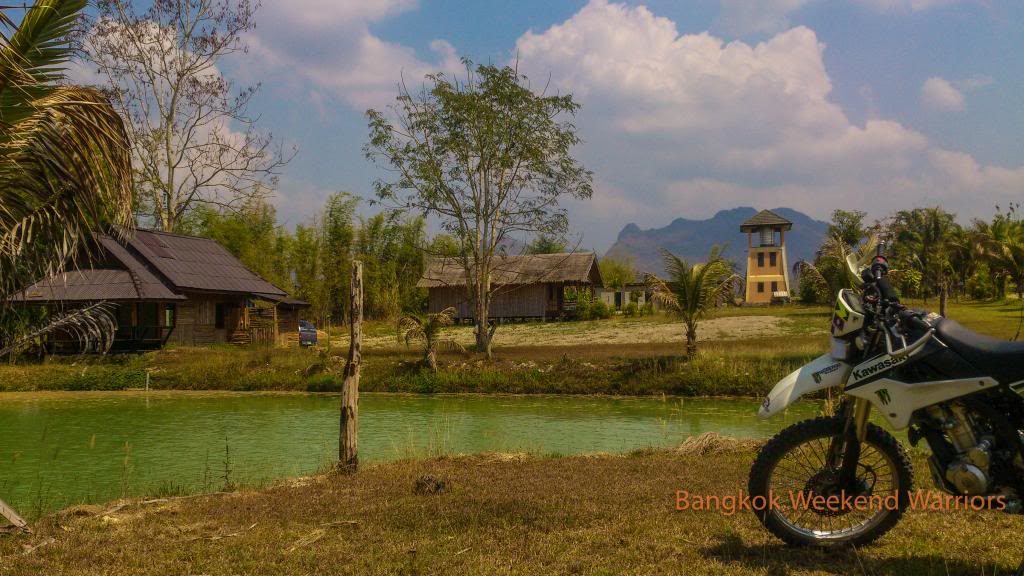 The track we rode on this day

Alan took me on this ride one weekend. To scope out the Enduro route he had planned later on in the season. 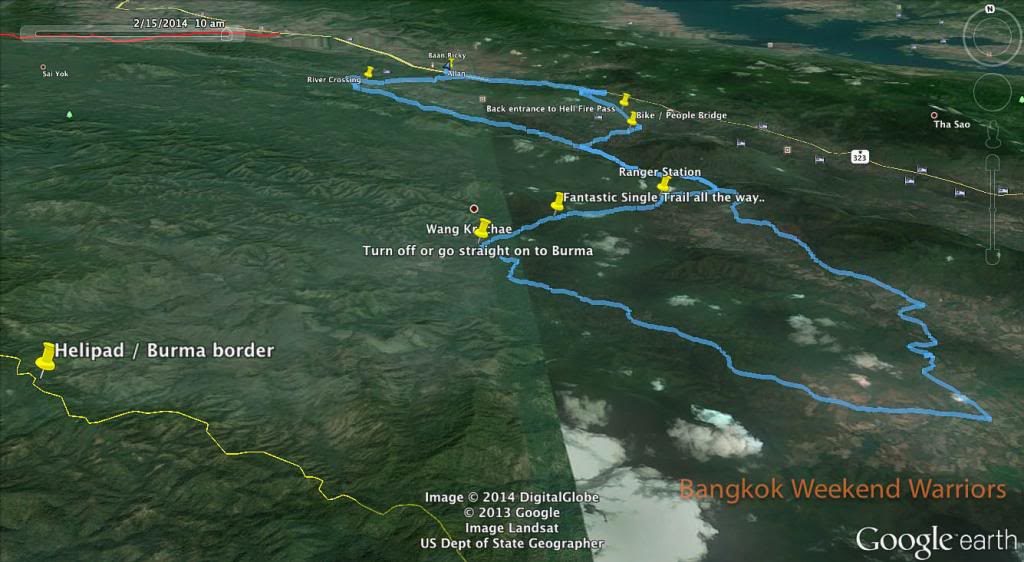 Certainly glad I saved all the rides with Alan.. There is no way known on earth you would have found the trails with out the GPS.
Some of the trakcs you ride off the trail and through the rubber plantation and there is a small trail on the other side of the field in the corner.

First we have a fun river crossing.. Quite funny as when we arrive at the river.. It is a cliff down to the river bank.

Last time Alan just took a look and off he went.. The old farmer near by having heart attack.. (me too)

Then Alan looks at me to ride down.. I am like.. No way I can do that..
So Alan climbs back up and rides my bike down and we cross the river which is much deeper than this time 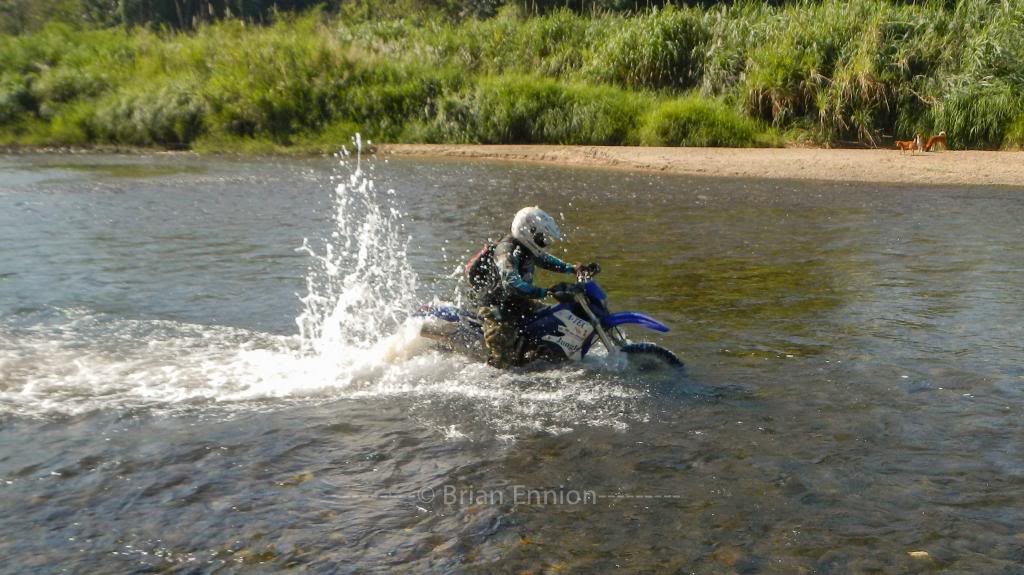 If you ride 50 metres further along the trail.  There is a nice trail down to the river. Pretty sure this wasn’t here last time.

The track for cars etc had been washed away in the rainy season. 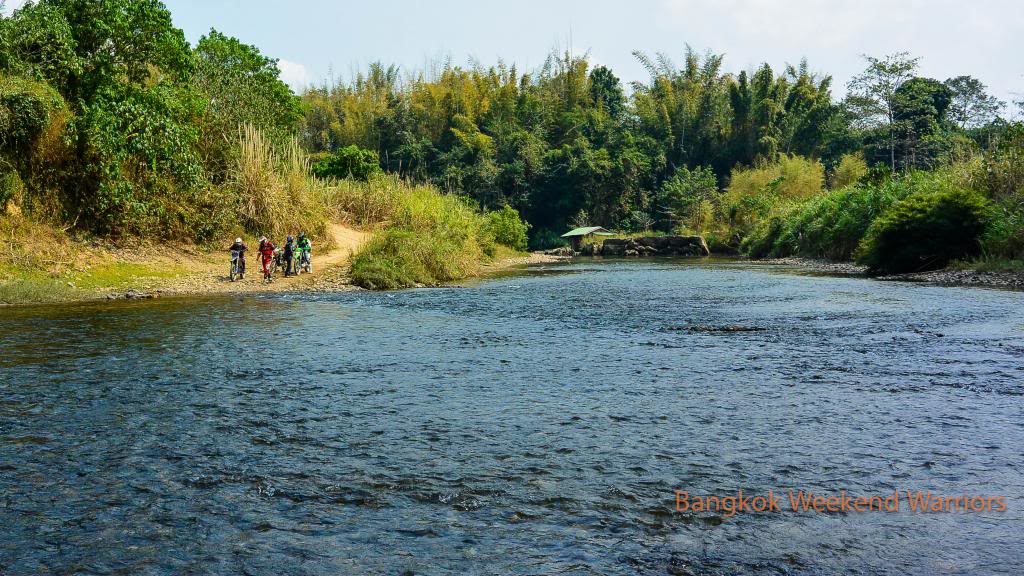 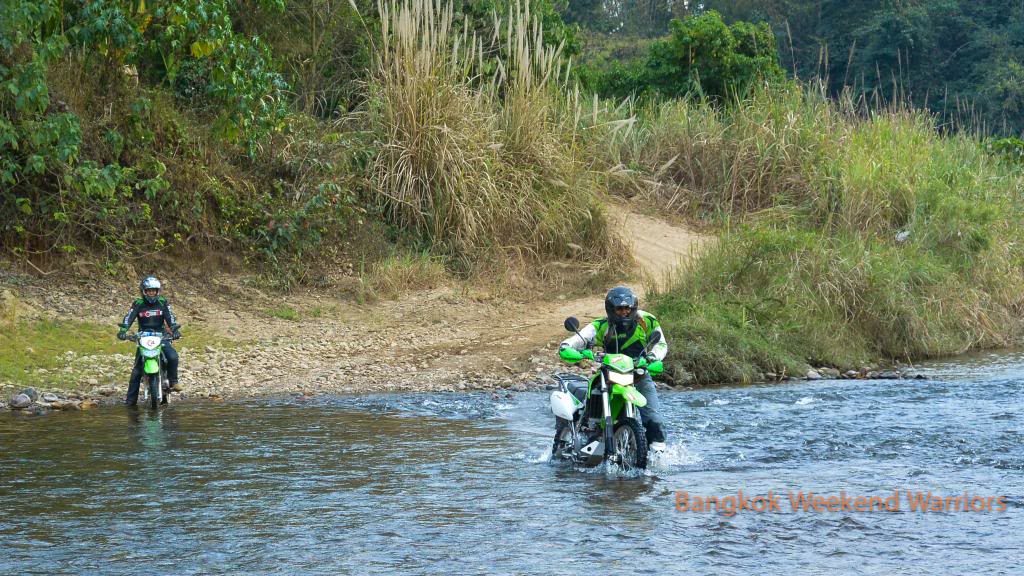 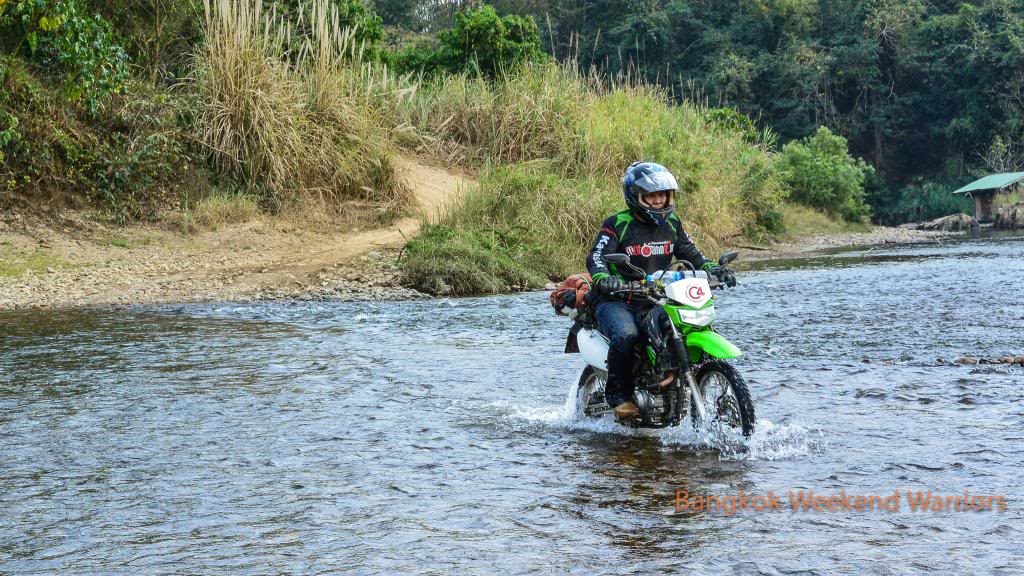 Not deep but loose rock and swift current made it fun..

The track guys having some fun on the Enduro trial.. 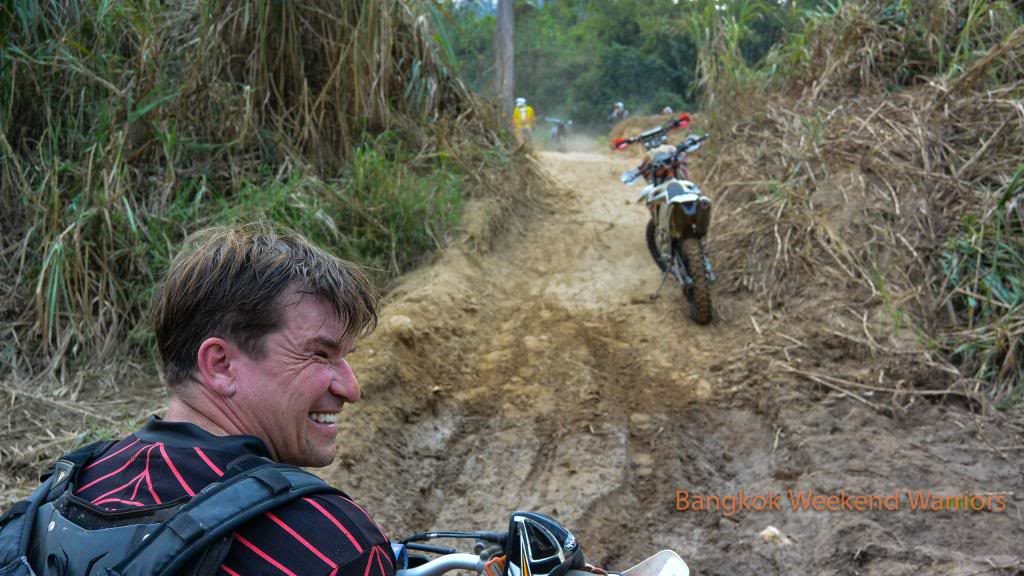 Next some lovely flowing trails to ride along up to the National Park and Ranger station.
No problem getting in at the ranger station. They were only concerned, if we went all the way to Burma border we would be coming back in the dark.

We agreed. As it was a late start, to turn off about 1/3 of the way in and continue on with the original track and do the Burma border run the next day.

Burning off season in Kanchanaburi.. You can see fires burning through out the mountain’s at night time

Had one eye on my bike making sure it didn’t burst in the flames. 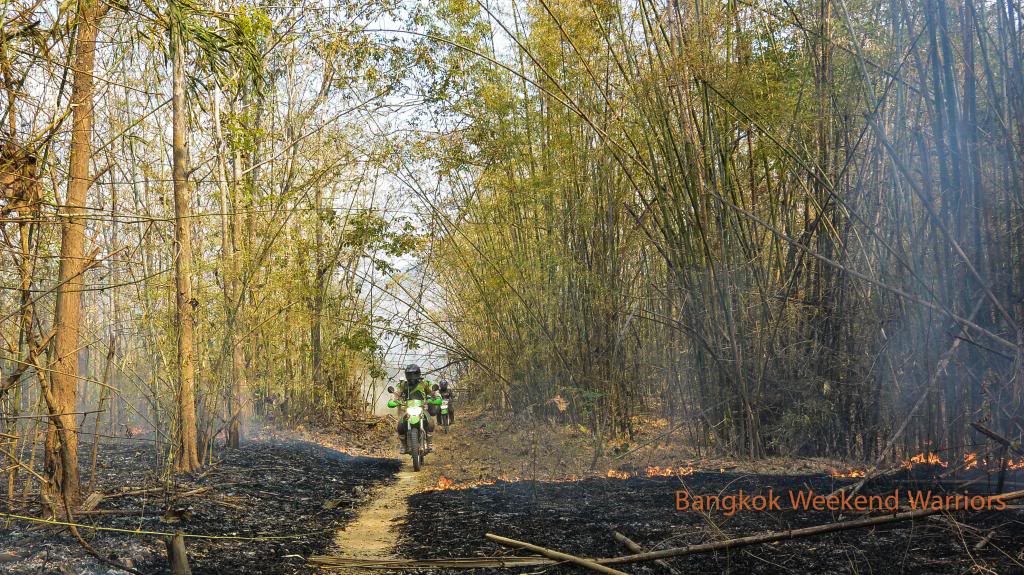 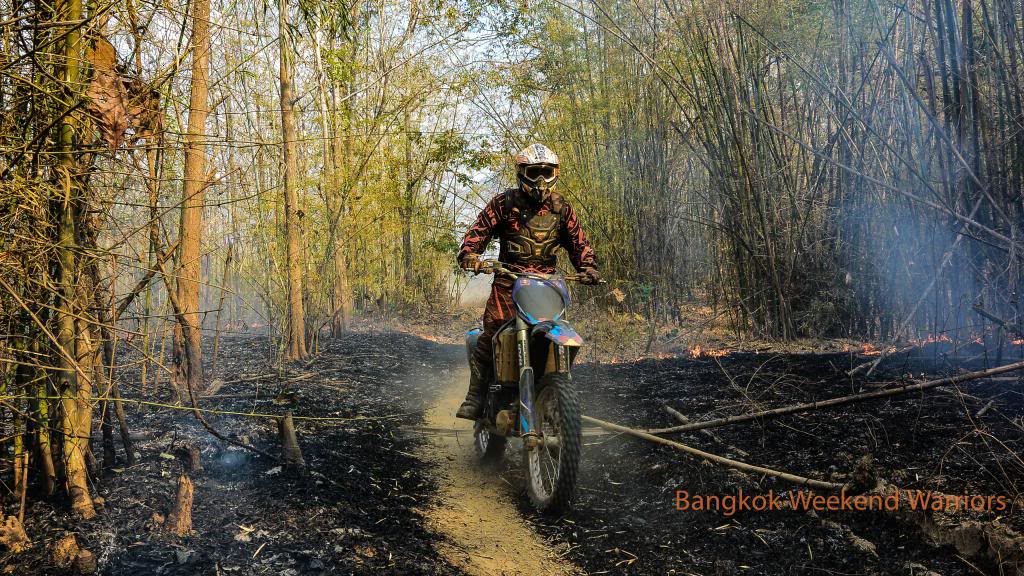 After doing a big loop around. Time to head back to Baan Ricky.

We made it back just on sunset.. A bit of an adventure to get through the final few KM.

At Hell Fire Pass and Hintock Camping area they have put up gates across the road.. Not so good if you come all that way and need to get out.

Have dirt bike.. Will find a way through.. Back we go and over the drain and through the bush and drop down on the other side of the gate…

Then back for a great dinner at Baan Ricky. 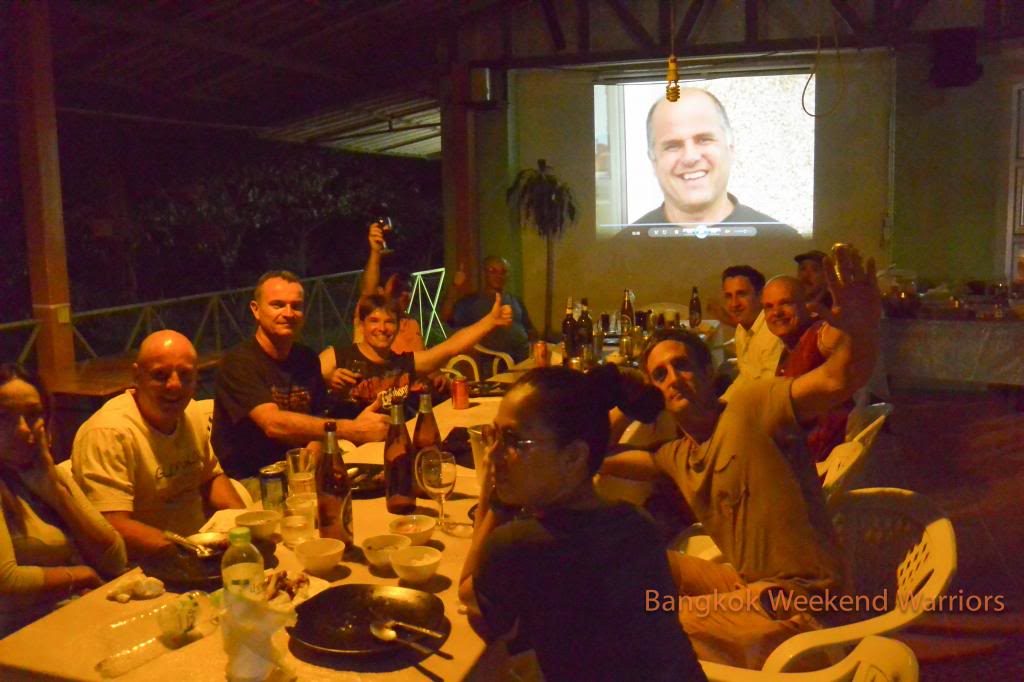 PS.. Not so many pics this ride.. These Pattaya guys ride fast…….

Today is the Burma Jungle Run. 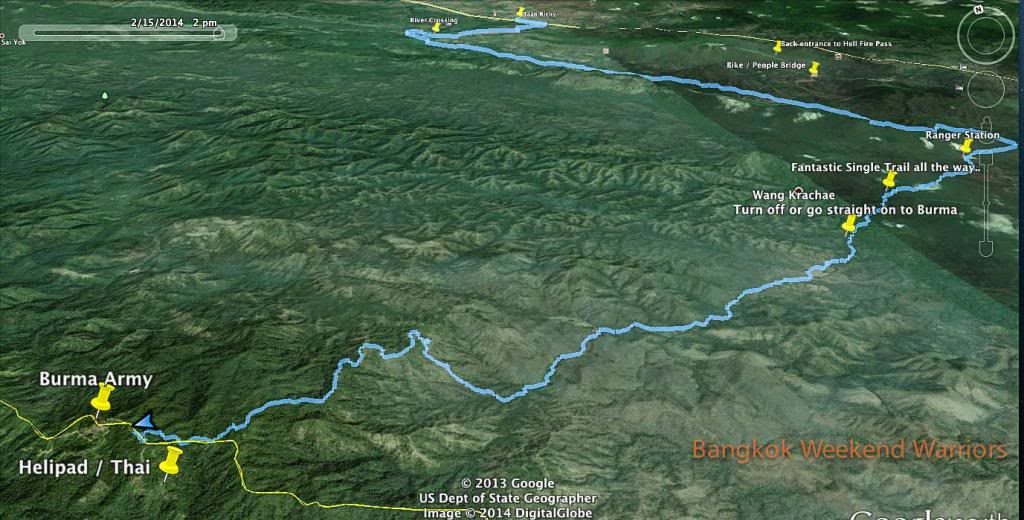 The track from the Ranger Station to the Border is just fantastic..

Great trails before too.. The Ranger Station to the border and back is EPIC.
Creek crossings, steep, sandy, single trail, rocks, bamboo.. has it all.

This time we are up a bit earlier.. Sam and K. Montri head back to Bangkok.
Miesha & Kat arrive.. (Sorry if the spelling is wrong).

Nine Riders.
Alan had talked about this trail.

We had to turn off when we did the Enduro scouting ride. as Alan’s bike didn’t have enough fuel..

The guys topped up with spare fuel strapped to the bikes and in backpacks. 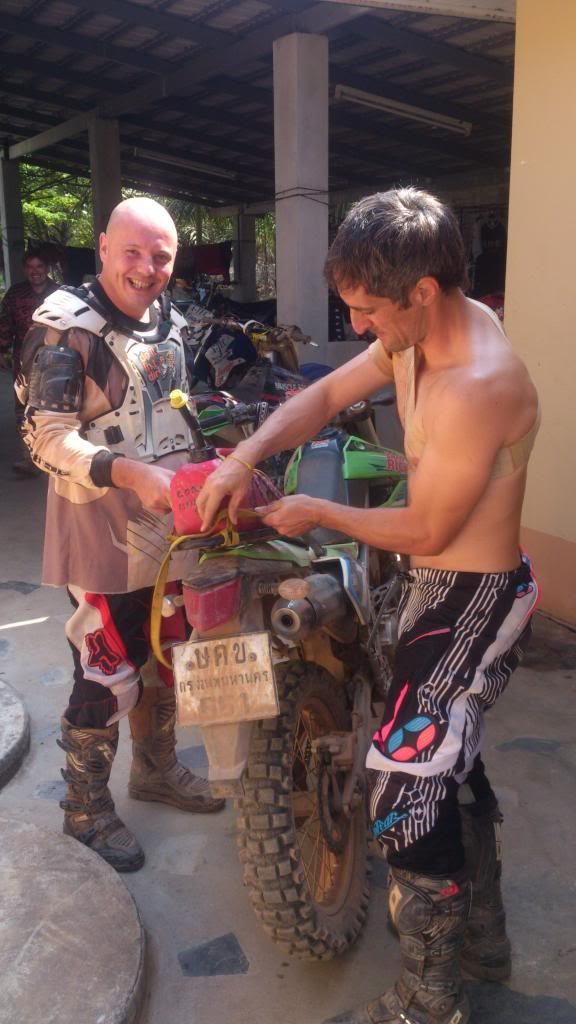 We all enjoyed the route the day before so much.. We decided to go the same way.
No pictures the day before.. But they have put a bloody drain right at the end of the first trail..

We could have probably done with out the drain..

I crashed each day trying to get up.. Oh well.. Practice makes perfect.. 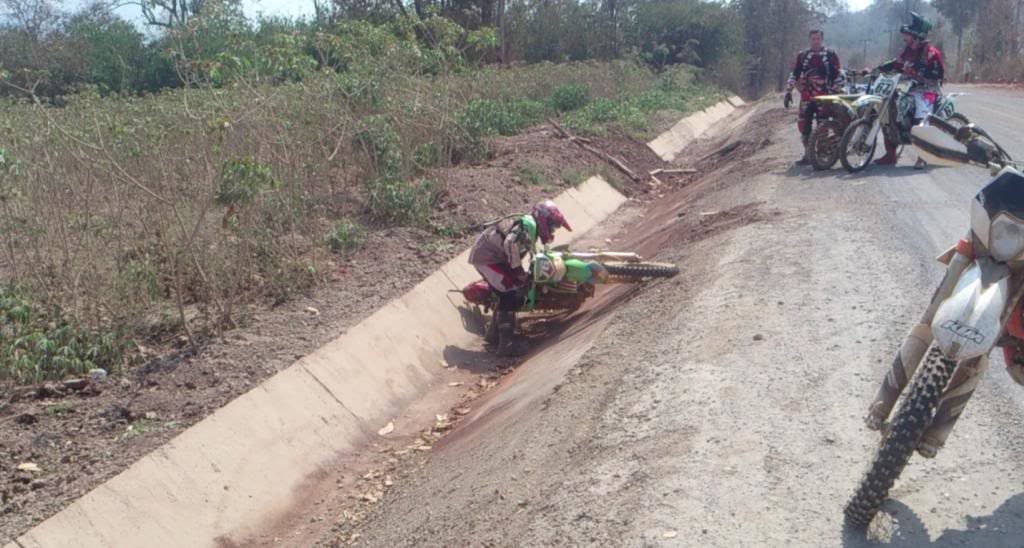 Thanks for the pic K. Montri. 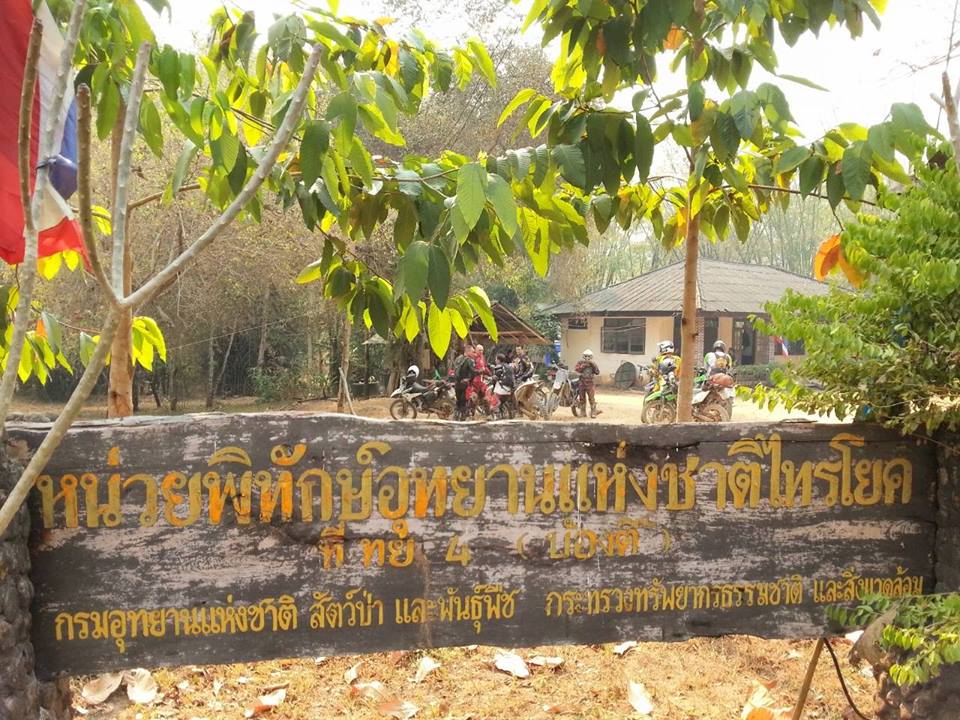 All enjoying the trail with big grins on our faces..

We pass a couple more ranger stations that are closed. Then make it to a checkpoint about 10km from the border.

Baan Ricky at the left. Where it starts to get steep is the checkpoint we need to sign in at.

Pretty sketchy in parts… Rocks, loose gravel, the track had been graded some what.. but still easy to lose it in sections.

The check point at the bottom has a turn off to a very remote temple in the middle of Sai Yok National Park. 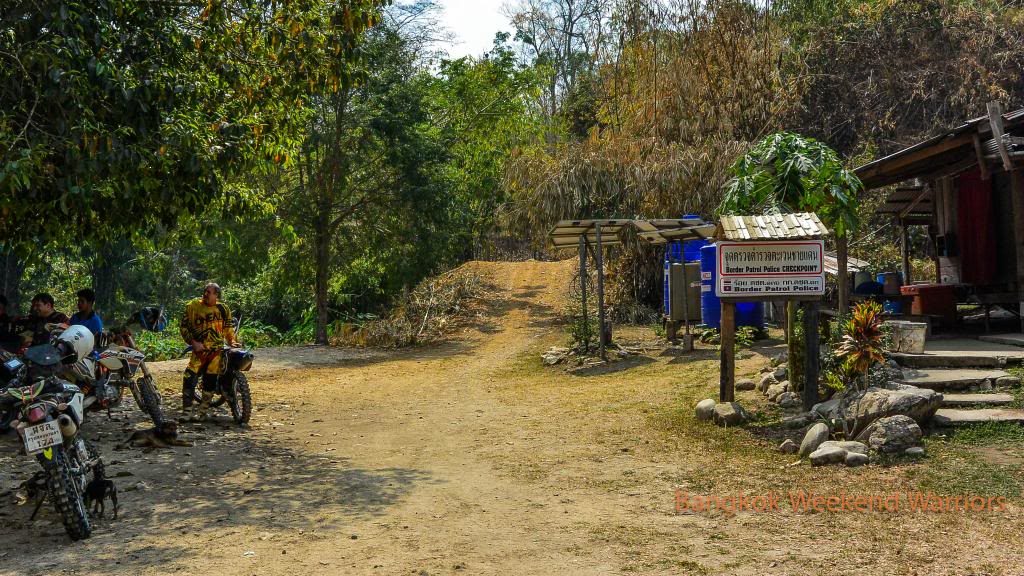 As you reach the top.. There are trails that go straight ahead and to the right.
The trails have a couple of strands of barbed wire across them.

Burma is on the other side of the barbed wire..

Looks like Zulu with all the fortification…
All we needed is Michael Caine in his cockney accent. “Don’t you throw, those bloody spears at me” 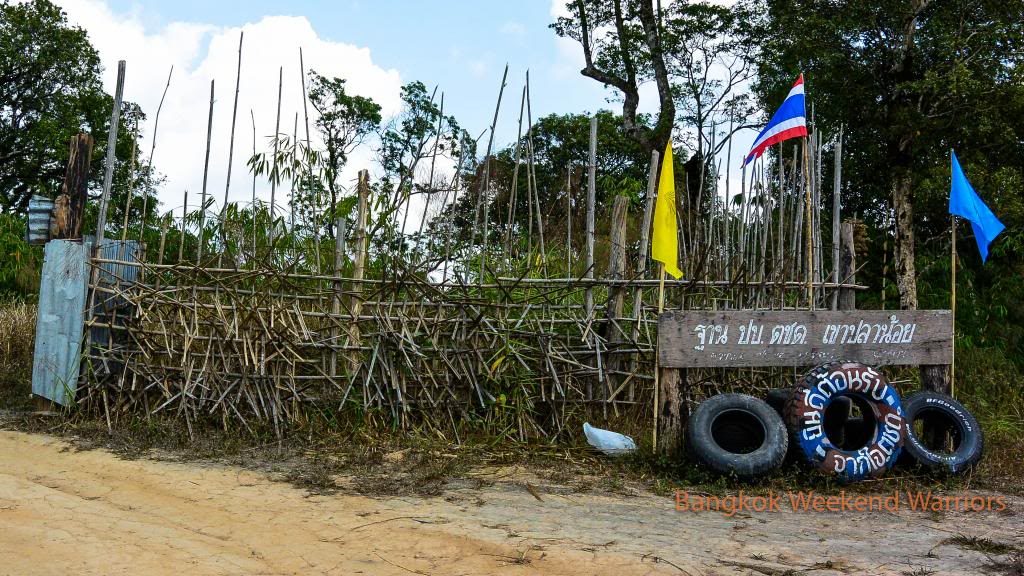 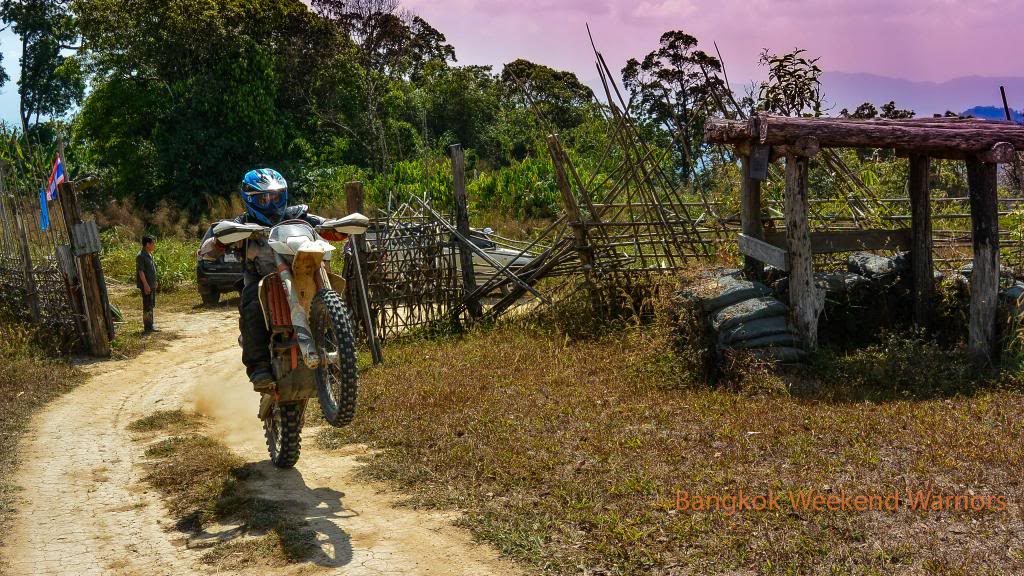 The helipad to the right, Buddha to the left and the Burmese Army on the hill in the background. 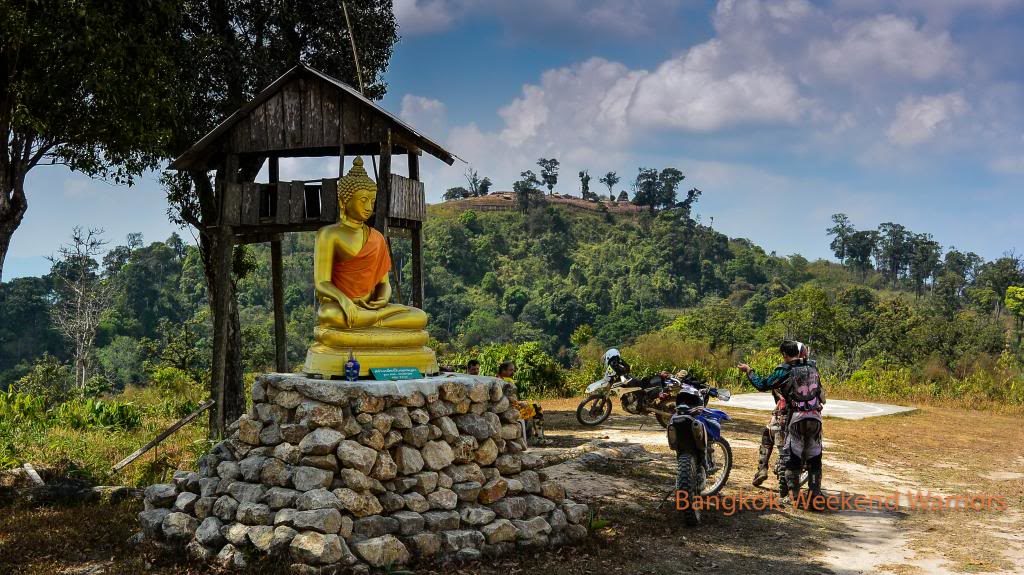 The picture is deceptive.. The hill with the Burmese Army is very close and you could see the flag flying 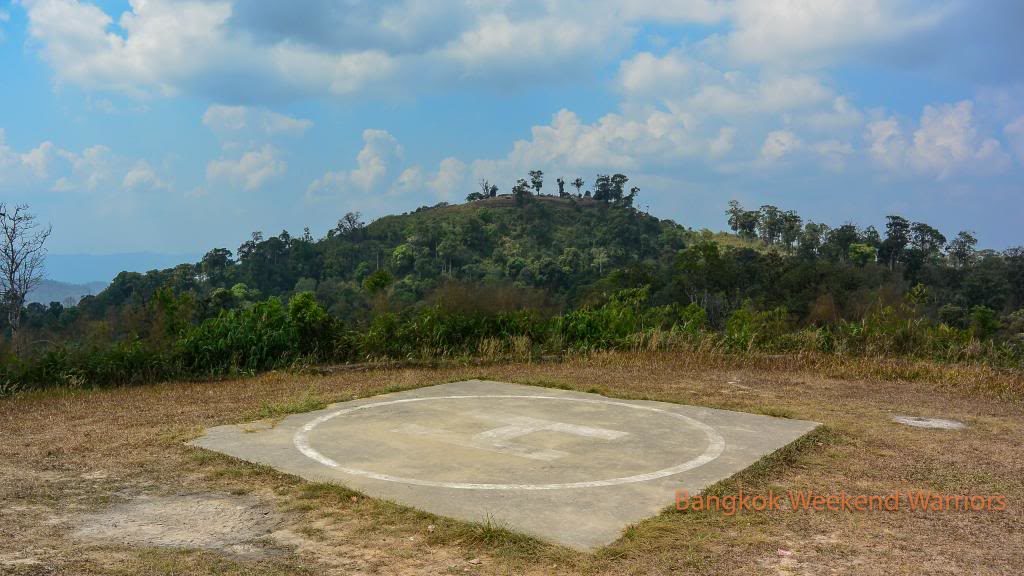 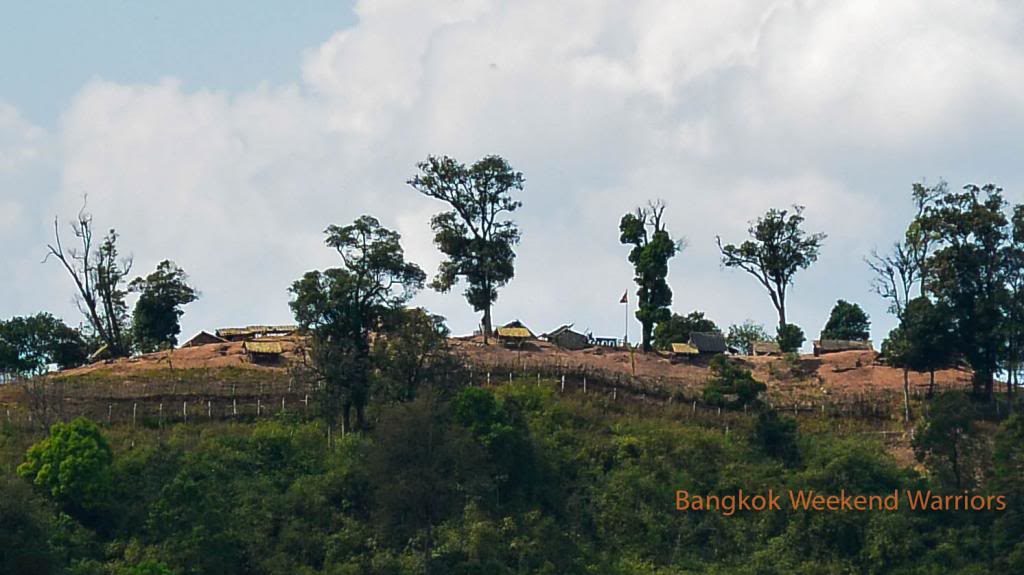 Back down the trail and out the same way..

Again.. Great fun then back the same way as the day before. 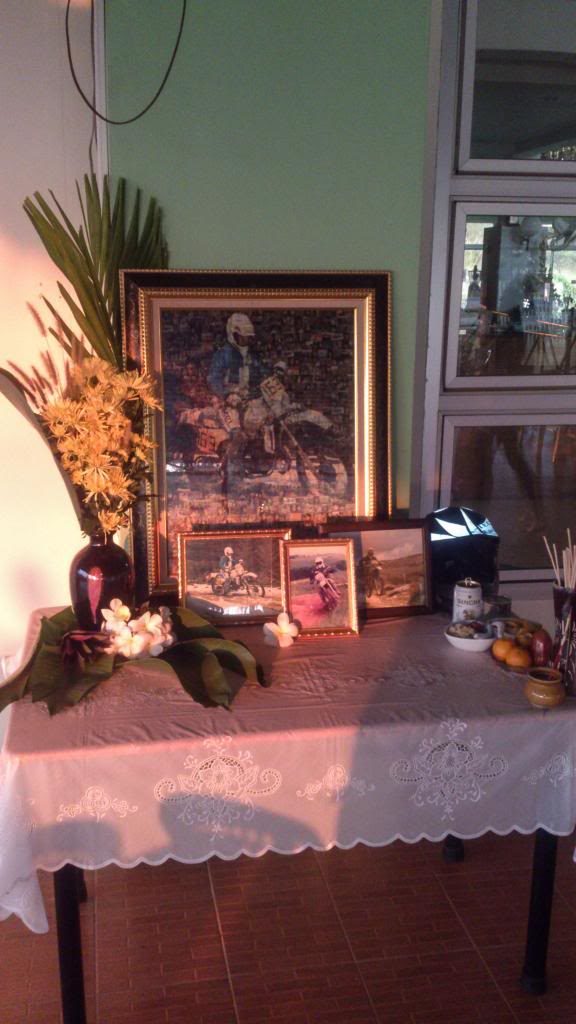 A weekend at Baan Ricky isn’t complete with out a late night visit to the Hindat Hot Springs. 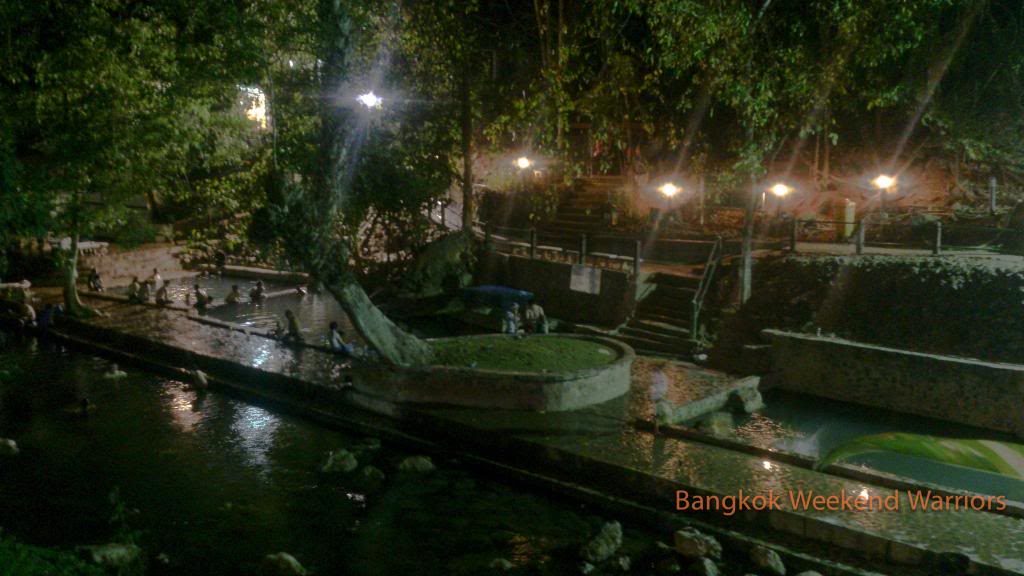 Now the die hards are left that can’t get enough riding.

This time we decide to sniff out the famous Bamboo jungle trail.

Plus a general ride around this side of the 323.

Boy was it dusty..

As you can see by the map.. We managed to get lost a few times.
But getting lost is good sometimes.. Found some great single trail and a small creek crossing. 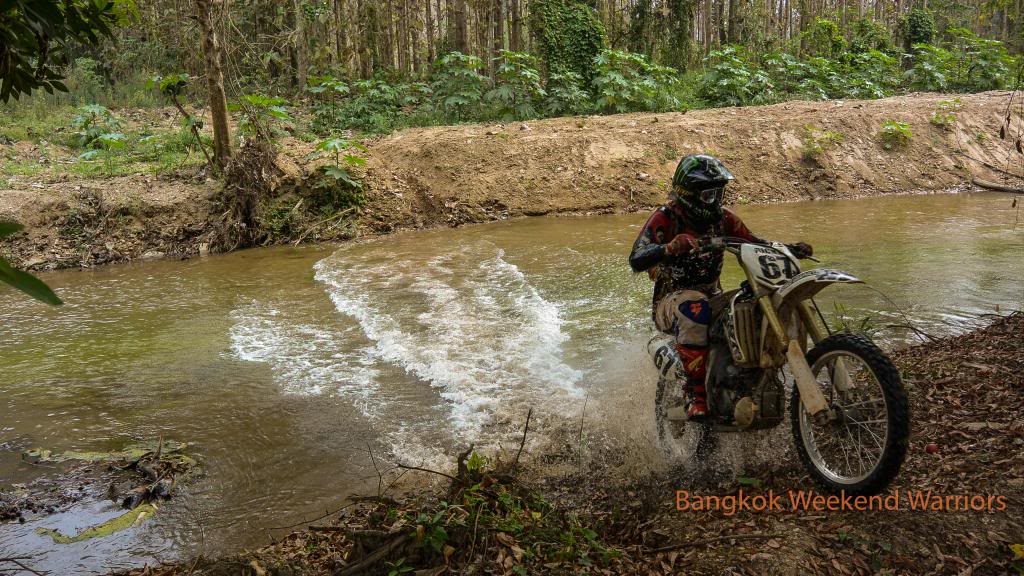 One of Alan’s pit stops.. We stopped and had a drink. 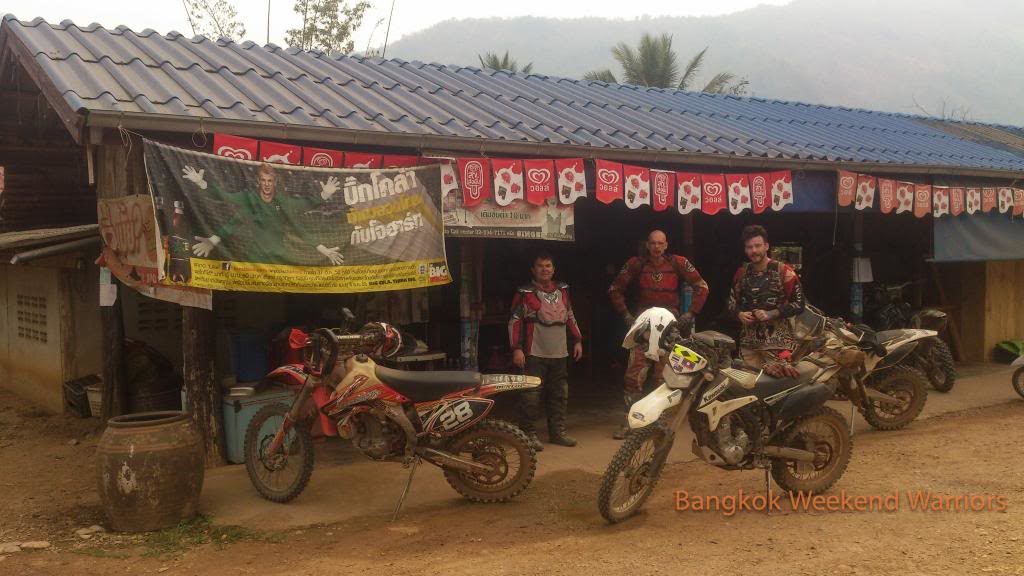 Big THANKS to Ruben and Ricky for the organising

Made some new friends and re-established some friendships from last year..
Looking forward to meeting up with the Pattaya guys for rides in the near future.