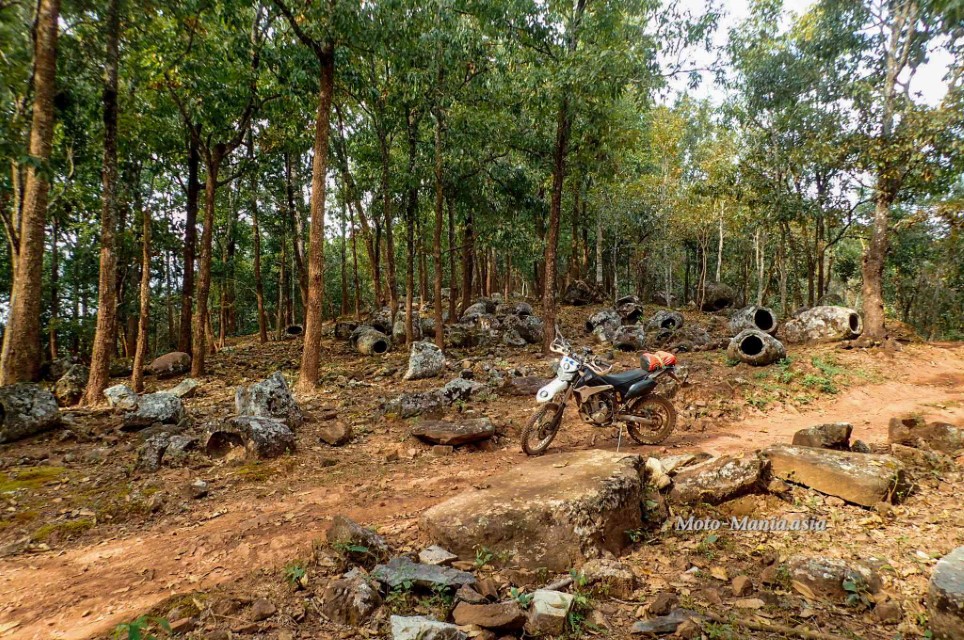 What to do next?

In Phonsavan and Hmong New Year is still a few days away. Thinking what to see and do next?

Over beers started chatting with some Australian archaeologists from James Cook University that are here checking out various Jars sites.

They highly recommended heading out to Site 52. It is approx 27 km out of town on the paved road then about 16 km dirt through the mountains.

Feeling a bit lazy this day. I was on the bike around 12 or 1 pm.  This ride and site visit can be done in a morning or afternoon.

I was pleasantly surprised by the lovely scenery on the way to Site 52. Some real nice trails. Local bamboo bridges as well as a river crossing that you go through twice if you don’t take the Bamboo Bridge.

Not sure I would want to do this in the rainy season. When you get to the mountains it is steep and clay. It was dry, but the track and clay surface shiny.

Riding up and down, steep and rutted. Begining to think the directions or GPS are wrong. Ok. 4 or 5 more kilometres and I will head back..

Next turn and right in the middle of Site 52. Just stunning. No tourists, no ticket sales. Just a few locals passing through.

There appears to me at least, to be 3 groupings of Jars in this site. The road goes though the middle as you enter. Then forks with jars on the left and in the centre.

Heading Back To The Main Road

A short video riding in and around Site 52.

Make the effort. It is worth it.

The Plain of Jars (Lao: ທົ່ງໄຫຫິນ [tʰōŋ hǎj hǐn]) is a megalithic archaeological landscape in Laos. It consists of thousands of stone jars scattered around the upland valleys and the lower foothills of the central plain of the Xiangkhoang Plateau. The jars are mostly arranged in clusters ranging in number from one to several hundred.[1]

The Xieng Khouang Plateau is located at the northern end of the Annamese Cordillera, the principal mountain range of Indochina. French researcher Madeleine Colani concluded in 1930 that the jars were associated with prehistoric burial practices. Excavation by Lao and Japanese archaeologists in the intervening years has supported this interpretation with the discovery of human remains, burial goods and ceramics around the jars. The Plain of Jars is dated to the Iron Age (500 BC to AD 500) and is one of the most important prehistoric sites in Southeast Asia.

The most investigated and visited Jar site is located close to the town of Phonsavan, and is known as Site 1. Seven jar sites have now been cleared of unexploded bombs and are open to visitors. These are currently sites 1, 2 and 3, and Site 16 near the Old Capital Xieng Khouang; Site 23, near the big hot spring in Muang Kham; Site 25 in the largely unvisited Phou Kout District; and Site 52, the largest known jar site to date with 392 jars near a traditional Hmongvillage only accessible by foot.