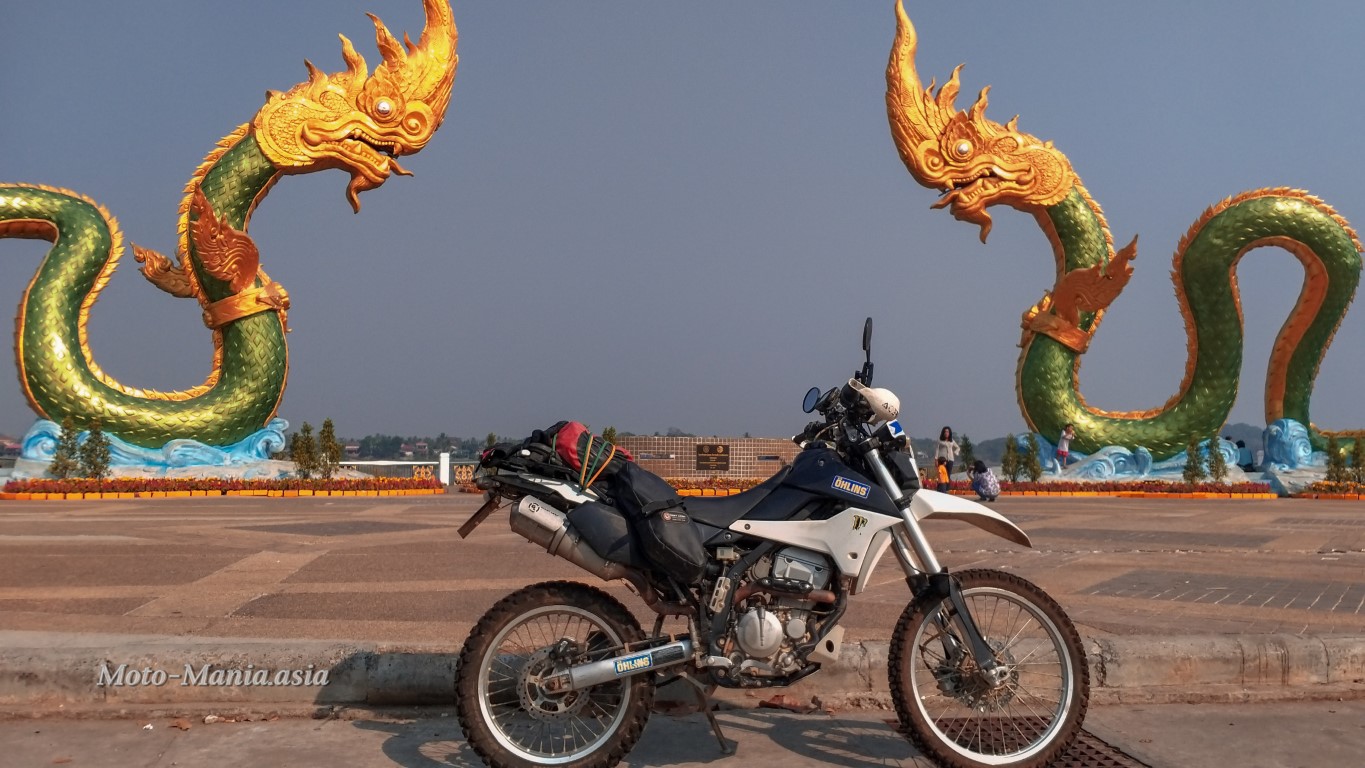 Time to get out of Bangkok for the weekend. Thursday afternoon book a cheap ticket with Nok Air and on the plane Saturday.

The KLX is currently sitting at a friends place in Nong Khai waiting for me.

All sort of agriculture along the river. Tomatoes, tobacco and many more..

Not every day they get a KLX with a Farang back here. As riding around I could see all the workers stop what they were doing and just look / stare.. Others I passed usually gave a big smile or a wave.

Following the rivers edge. Seems to be a lot of projects going on to stop erosion along the Mekong.

This ended up being a bit scary. Just following the trail. No fence, no signs.. Nothing. Carry on, dead ends at the Mekong. Sand dredging going on.

I head back.. These two BIG dogs coming for me at top speed. Try to kick one and aim the front tyre at the other.. Didn’t dare to try and turn left to the main road and kept going straight to get away from them.. Praying the 50 50 tyres don’t let me down in the sand.. Made it away.. But if I had come off.. Those dogs would have ripped me apart.

More rambling.. You have to make a big effort to get off the main road and follow the smaller roads. Look on the GPS in case there are creeks or rivers further along and not passable.

This town is a little gem. You can see how the French influence crept over the river back in the day when the central authority in Bangkok was less influential.

Will be back to have a good look around town.. Lovely river front to walk and cycle on. Clean streets, nicely done buildings

Found this Hotel on the river for 1,000 baht.. Unfortunately no river view rooms left. Bike allowed to park at the front.

After a walk around.. Settled here for Beers and dinner.

Nice place. OK band and not too loud.

The top route hugging the Mekong. The bottom route letting the GPS take the shortest path and a mystery tour though the Isaan back country.

Peter and Noi were home. We went for a great lunch by the river..

Both just getting over a nasty bug..

Hello Kitty Mania. Not sure what I would have thought if this was my first time to Thailand and getting a taxi at the airport.

Another ripper weekend on the mighty KLX

Until the next weekend Getaway.