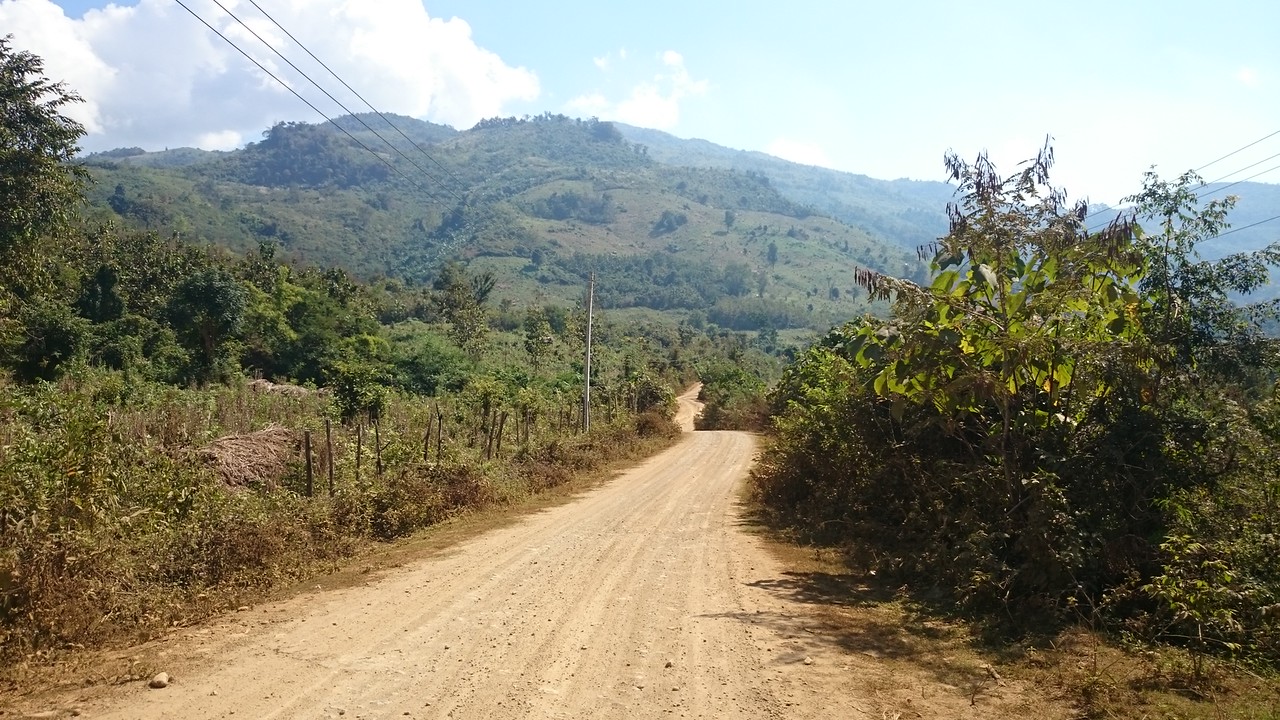 The last time to ride this track as Dec 2016. Not really in a hurry to come back as expected the trail to be gone with all the road works.

Well. Surprise. All the road works came to nothing.. Bridges not finished, concrete pipes abandoned.. Almost as if. All the money disappeared and they stopped working 😉

Still not any where near as good as years back.. Bit nice compared to sitting on the boring paved road.

The first 20 plus KM out of Luang Prabang is a big long boring wide graded and gravel road.. Then mother nature starts to claim the track back

One of the many bridges not finished. So with the increased Mekong level from the Xayabouri Dam. This all floods out in the rainy season.

Plenty of these dumped along the way.

In all the years gone past.. Don’t remember having to take a boat.. But could be wrong.

The husband and wife had their daughter with them on the boat. You can see where they made camp on the bank of the other side of the river.

Super nice people. The father didn’t want any money.. I refused and said I must pay.. He wouldn’t take my money. When I insisted. He gave the money to his daughter.

The wife pulling us across. He had some disability. Left leg was very small and couldn’t walk properly. No way I was going to take this crossing for free. As much as I appreciated the offer.

Fun flowing stuff and a bit rocky in places. More in the video.

This hasn’t changed. Which made me happy.

A nice ride. Even if a bit boring to start with out of LPQ.

I guess it took me 3 hours. But I wasn’t racing and stopping to look at things and take pictures.

It has been a few years since I have done this route.

The development has arrived big time. There is only around 10 km which is relatively untouched.

The rest has graders and track being widened all the way.

Where they have not caught up. The bridges are going in ready for the main road works arrival.

Some of the bridge works may be in preparation for the dam and the higher water created with the reservoir.
Other parts are just to high up and part of the road expansion.

Link below for where the water will sit with the dam reservoir.

Kids playing and road works going on around them

One of only two crossings where I could not see an obvious bridge crossing.. BUT.
There were some major NEW road works bypassing the original track in a couple of locations. So that could be why.

The majestic Mekong looking a little naked of water.

More bridges going in around the nice part of the track ready for the road works.

Still a couple of nice bits..

Where it gets twisty and winding with nice views of the Mekong.. The earth movers are getting ready to flatten it out

No obvious bridge going in here

Decided not to come back this way today.. In case I was lucky and caught lunch break and the open track

You can imagine what that looks like.  Another good trail gone to the graders.