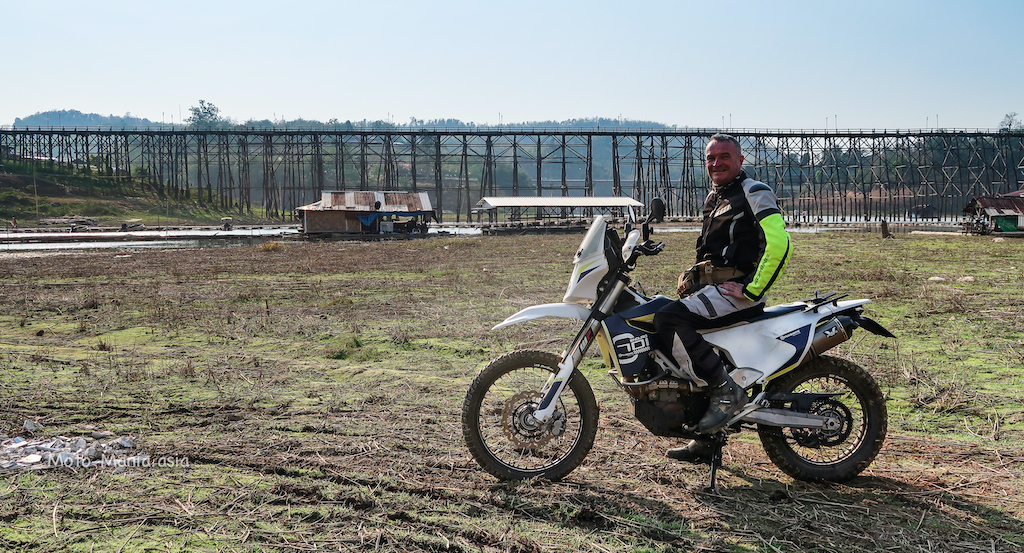 Western and Thai food on the Menu.

Good to see the staff again as not been down for a while.

Unfortunately. Ricky was away with his kids at a MX race.

The 3272 up to Pilok is in the best condition I have ever experienced.

A few rough bits here and there but way better than 18 months ago.

Most of the really nasty stuff gone.

You can see the smoke hanging below 1000 metres.

This is where you are stopped.

No visit to the Myanmar Army post and the locals selling Myanmar Beer and spirits.

Setting up camp after getting the OK from the Border Patrol Police.

We went to the Border Patrol Police to confirm camping is allowed. (I have camped here twice before with no issues). Given the go ahead, told we can use the toilet and shower.

We setup camp and went to the village. Had a beer and picked up some supplies and came back to the camp.

Then one of the local pickup drivers that brings tourists up had a bitch to the BPP about us camping there.

Now we are told we cannot camp. Even after being given the go ahead and told we can use the toilet and shower earlier on. So with less than 30 mins before dark. We have to pack up all our stuff and told to head to the camping ground.

Well. We are not doing that. Quite obviously this guy has some vested interest in us using the camping ground and paying. I would rather sleep on the side of the road than give him what he wants.

We want a good view and did the right thing by asking for permission first at the Border Patrol Police.

As we leave. I spot a couple of guys sitting in chairs with pickup a little further down from our camp site. Ask them are they going to camp. Yes. But waiting for the guy causing trouble to go first before setting up camp.

Having ridden around here a lot of the years. We head for Pilok Mine up the gravel stone track and wait and watch for his headlights to pass.

While waiting consume some beers and when totally dark. Head back to the camp where the other guys are.

To say I was pissed off is an understatement. Just a rotten spoiler creating problems for no reason.

Waiting for dark and his headlights to pass. We head back in the dark to setup camp.

Some bad language in the video :-/

We are back and the two guys have already setup their camp. We setup next to them.

Enjoying the evening and share some booze and food and have a good night.

Sunrise over Thailand. The orange look is from the burning off.

Stop for a coffee and a bit of food.

The food was pretty terrible. My omelette was cooked with 500 year old.

A nice ride to Sangkhlaburi. Minus the mountain being on fire and the choking smoke between 700 metres and 400 metres coming down.

It was better down below. Just grey skies.

Some places we saw the fires raging along the road, even the power lines on fire.

The water level at the dam is very low.

Off to a nice little place with a view of the sunken temple.

Hidden behind a school and a bit of minor dirt to get here.

So lucky to get photos with no other tourists about.

I bought some sweet roti bread at the night market. We gave it to the Mon kids on the bridge.

They were so happy and enjoyed it.

The next morning when we walked over they remember us and said how good the sweet roti bread was.

On the Mon side. Looks like they are paying respect to someone that passed away not so recently.

People coming and going and dancing.

A walk over the entire length of the Mon Bridge.

This place is so dead. Covid destroyed economy.

All the shops around the car park are closed. The market near immigration is open but no customers.

I had read it was pretty quiet up here. But wanted to see for myself.

Before walking around. Confirmed it was OK with Immigration.

A walk around the Three Pagodas Pass and Border area.

Before leaving. We walk over the Mon Bridge one more time and have a traditional breakfast.

It was very good.

After following the 323 to Sai Yok Yai. We take the back roads and light off road trails the rest of the way to Sai Yok Noi.

Back at the resort and Beer O’clock by the pool.

I parked my pickup here the first day and booked the rooms for today.

After some Beers and Regency it was back to Bangkok the next day.

Other reports here on Western Thailand